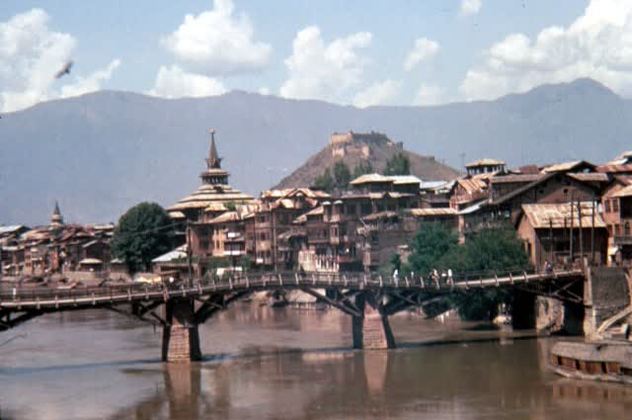 Share
This mosque, situated on the right bank of the Jhelum River, is an excellent example of indigenous wood architecture that draws inspiration from Buddhist, Hindu and Islamic architecture. Constructed by Sultan Sikandar and dedicated to the memory of Mir Sayyid Ali Hamdani, a Muslim saint from Hamadan, Persia, this mosque also serves as a khanqah. In the Ain-i-Akbari of Abul Fazal, there is mention of a saint living in Srinagar and founding this monastery in his name.

The mosque has been raised to the ground and rebuilt three times. Ravaged by fire in 1480/885 AH, it was reconstructed and expanded by Sultan Hassan Shah. In 1493/898 AH it was demolished and rebuilt as a two-story structure. Again in 1731/1143 AH fire destroyed the mosque; Abul Barkat Khan reconstructed it.

Most mosques and shrines (ziyarat) in Kashmir are based on an architectural pattern of a low, cubic space forming the prayer hall or burial chamber, which is then covered by a pyramidal roof and often supported by a series of pillars. Large mosques will have a third element known as the mazina which consists of a square, open pavilion from which the muezzin would give the call to prayer (azan), and a sharp spire which represents the minaret.

The Shah Hamadan masjid neatly fits this local typology of mosque architecture. It has a square plan measuring approximately 75'-6" (23m) on each side and sits on an irregular walled base composed of materials from ancient temples. It is a two-storeyed, two-tiered structure with gently sloping, pyramidal roofs differentiating each tier. The roofs are further emphasized by heavy woodwork done on the cornices under the eaves. The first tier has double-arcaded verandahs running continuously around the building, the only break being for the canopied main entrance. The second tier is more of an arcaded balcony that protrudes on all four sides of the main structure. The arcaded verandahs and balconies with their delicate wooden grilles (pinjras) and slender columns not only lend structural support to the roof but also create the impression that the 52'-6" (16m)-tall mosque is soaring into the sky. The pyramidal roof of the second tier is capped off by an open pavilion for the muezzin, which in turn is crowned by a sharp pyramidal spire. The base of the spire has a protruding triangular decorative window on each face and has a golden end ornament (alem) at the apex. Parts of the roof have over time been covered with seasonally flowering vegetation, creating a charming image of intricate woodwork and terraced flowerbeds.

According to the historian Fergusson, the masjid of Shah Hamadan, although small, "is interesting, in the first place, because its roof is probably very similar to that which once covered the temple at Martan, and the crowning ornament is evidently a reminiscence of a Buddhist Tree (the umbrella-shaped finial of a dagoba) very much altered, it must be confessed, but still not so very unlike some found in Nepal, as at Swayambunath, for instance and elsewhere."

The building envelope is made of square logs arranged in alternate courses, which generates an attractive pattern on both the exterior and interior of the building. Fergusson also observes that the walls are interesting because the manner in which the logs are placed and ornamented resembled the ornamentation of Orissan temples more clearly then any stone forms we can call to mind.

Additions over time were made; for example, a small subsidiary temple and two rows of cloisters were created in the interior. The rows consist of 14 cloisters, which flank the north and south side of the large 69'x 46' (21x14m) prayer hall. The shrine of the saint is in a cloister in the northwest corner. The date 1384 AD (786 Hijra), marking the saint's death, is carved above the doorway. This tomb chamber is decorated with glass and glazed work. An annual congregation forms at this shrine to celebrate the saint's death on the 6th of 'Zilhaj', the last month of the Muslim calendar.

The walls of the prayer hall are woodwork panels with stone skirting. Some display the names of God carved in gold. At the center of the prayer hall are four solid wooden pillars nearly 23' (7m) in height, placed in a square configuration, which support the ceiling. They are decorated with painted wooden chips arranged in a fishbone pattern in the shafts, carved lotus motifs at the base, and leaf patterns at the 16-sided capitals.