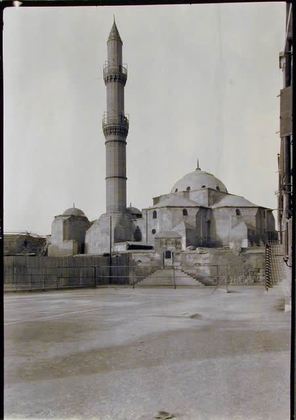 Share
The Mosque of Suleyman Pasha al-Khadim, the first erected in Egypt under Ottoman rule, was built in 1528 by the governor for the use of the Janissaries quartered in the northern enclosure.

The mosque is essentially Ottoman in plan and profile. The prayer hall adopts the Ottoman T-form variant and is covered by a shallow central dome in the Ottoman manner, flanked by 3 semidomes. This is fronted by a courtyard surrounded by domed arcades. The minaret is similarly Ottoman in form with a cylindrical, faceted shaft topped by a conical finial, and located to the right of the entrance façade. It is raised to a proportionately great height over the small mosque.

The interior reflects the outward Ottoman form with the dome resting on spherical pendentives, and is ornamented with marble revetment, inscriptions, painting, and elaborate stucco.

Other features of the complex include a shrine of the Fatimid period, rebuilt with its entrance incorporated into the arcades of the court. It was originally erected by Abu Mansur Qasta, governor of Alexandria around 1140, to house his tomb, and dedicated to Sidi Sariya, a companion of the Prophet, hence the common name of the mosque. A second court fronting two halls comprising a kuttab was constructed to the north of the mosque. The domes of the kuttab were covered with blue tiles. The complex was completed by a sabil, no longer extant, and a perimeter wall which encompasses other, subsidiary courts and gardens.