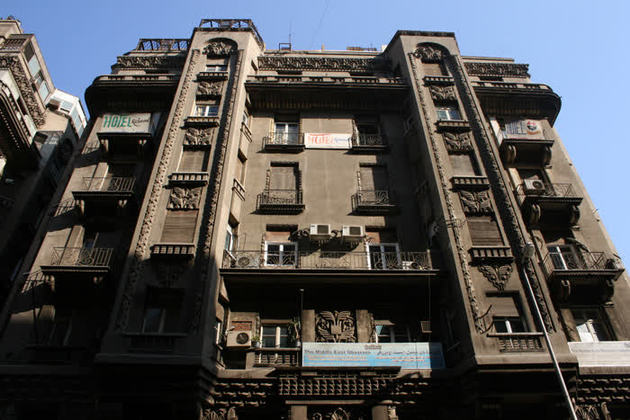 Share
The Rabbat architectural complex was designed by L. Azéma, M. Edrei and J. Hardy, a French agency founded in Paris in 1921 and based in Egypt between 1924 and 1929.
Situated in downtown Cairo at 41 Sherif Street, the vertical facade has bevel angular outlines and relief adornments.
Two overhanging “avant-corps”, framed with geometrical friezes characteristic of Art Deco, dominate the elevation. The main facade, open on a roof top with horizontal lines, has rectangular windows with decorative balustrades. One of the specific features is the ornamental opulence of Art Deco decorative elements – geometrised figurative motifs, cannelings, strikes – that cover the entire envelope and the entrance door. The facade also presents a succession of adornments inspired by nature such as stylised daisies, leaves, spread out bird wings and fruit baskets. Indeed, the fruit basket, called “compotier” and used here for wrought-iron balconies, became a symbol of Parisian Art Deco and was initiated by Andrea Vera at the “Exposition internationale des arts décoratifs et industriels modernes” held in Paris in 1925.1
All this superb Art Deco ornamentation contrasts with the simplicity of volumes and forms inherited from the Modern Movement. The envelope is of brick masonry and treated with plaster. The art of stucco to create relief adornments is typical of and characterizes Mediterranean architecture.2 The Azéma-Edrei-Hardy agency used this process of plastering for their Cairene constructions, whereas in Paris, Art Deco realisations result from the long tradition of stereotomy. For example, the residential building at 91-93 Quai d’Orsay, designed by Léon Azéma between 1927 and 1930, was executed in cut stone.
Author: Lobna Montasser
Notes:
1Liot D., Années folles, années d’ordre, l’Art déco de Reims à New York, Paris: éditions, Hazan, 2006.
2El-Wakil, Leila. "The Mediterranean DECO: from international models to national variations.”In: 2nd annual meeting of the Cost Action European architecture beyond Europe," Edinburgh, 11th February 2012. Accessed June 16, 2016, doi: https://archive-ouverte.unige.ch/unige:23874