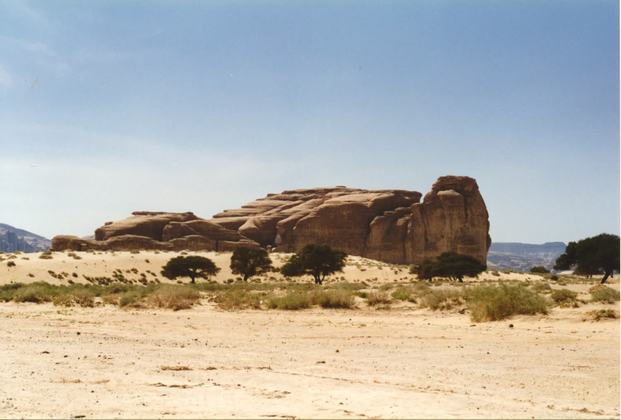 Share
Located today in Al Ula governorate a subdivision of Al Madinah Al Munawarah Province of Saudi Arabia, the Mada’in Saleh (“the cities of Salih”) are the remains of the once wealthy and powerful Nabataean kingdom. Prior to the Nabataeans it is believed that the city itself could have been founded as early as the first millennium BCE. In the 6th century BCE it may have been ruled by the Dedanites and subsequently by the Lihyanite kingdom. The date the Nabataeans integrated the city into their kingdom is unknown. However, most sources concur that it was in the first century BCE. It experienced its greatest growth under King Aretas IV (9 BCE – 40 CE).
The site, which is believed to be the most southern of Nabataean settlements, is typically categorized into three distinct areas: the tombs, the Jabal Ithlib جبل اثلب and the area of settlement. There are approximately 80 known tombs, all of which were carved out of the sandstone outcroppings in the area. Thirty-six of the tombs bear inscriptions, and all but three of those are dated between 1 CE and 75 CE. Accordingly, in the literature, the site is often described as “pre-Islamic.”
As a satellite city of the Nabataean kingdom Mada’in Saleh was of tertiary importance next to Petra and Palmyra. The city reached its height and flourished in the 1st century CE; however, Nabataean inscriptions are found all the way through the 3rd century CE. The three principal areas of the site are the Tombs, the Jabal Ithlib Complex, and the settlement area.

Originally, the Nabataeans did not build houses due to their nomadic background and remained living in tents, even when they were carving tombs out of rock for their graves. But as the Nabataeans formalized their kingdom and strengthened their control of the trade routes, their towns and residences became more permanent. The town remains largely under the sand and unlike the other two sites was not carved out of living rock, hence the impermanence of the site. The dwellings are believed to be built of sun-dried mud bricks. Stones, which bear Nabataean inscriptions referring to dwellings, have been found in other later structures on the site, such as the nearby Ottoman fort. This is the least understood area of the site. However, based on what is known of the rest of the site and other inscriptions that have been found, archaeologists believe the settlement area comprised houses, temples and administrative buildings as well as markets and caravanserais such as those at Petra. Based on the remains that have been found, most of these buildings would have been constructed in a Greco-Roman style. Nabataeans were master masons known not only for their carving, but also for their skill in creating portable dressed stone for building use.
In 2008, Mada’in Salih became the first site in Saudi Arabia declared a UNESCO as a world Heritage Site.
SOURCES:
Bowerstock, G. W. Roman Arabia. Cambridge, MA: Harvard University Press, 1983.
Hammond, Philip C. The Nabataeans--Their History, Culture and Archaeology. Gothenburg, P. Åström (S. vägen 61), 1973.
Healey, John F. The Nabataean Tomb Inscriptions of Mada'in Salih. Oxford: Oxford University Press, 1993.
Taylor, Jane. Petra and the Lost Kingdom of the Nabataeans. Cambridge, MA: Harvard University Press, 2002.