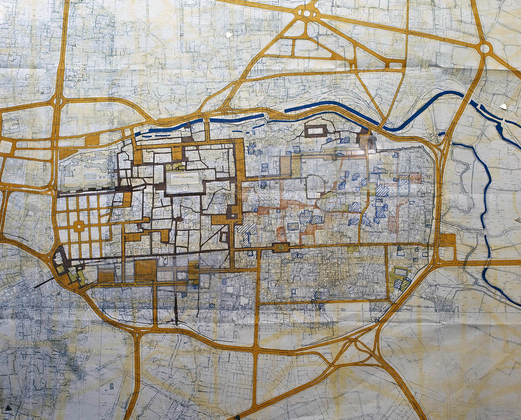 By 1968, Syria had been independent for more than 20 years, and the French architect Michel Écochard was appointed to produce a master plan for the city of Damascus that would be grounded in the principles of 'functional' town planning from the Athens Charter. He brought a great deal of experience to the project, particularly because of his involvement in the development of the 1936 plan for the city. For the project, he took on the Japanese architect-planner, Gyoji Banshoya, assisted by Nobuo Goto along with J. Bugnincourt and Écochard would shuttle between Paris and Damascus in the course of completing the work.

The plan tied together elements of history, regional planning, hydrology, demography, studies of traffic, the provision of amenities and concentrated on protecting the water sources of Damascus (la Ghouta), extensions particularly to the south-west of the city and at Mezzeh and the airport area, a deviation of the ring road to allow circulation to regional heavy traffic and linked to the route de Beyrouth so as to avoid the narrow Barada valley.

Écochard wanted to uncover the architectural marvels of the ancient city, particularly the Citadel. Similarly he wanted to open up a square in front of  the Ummayad Mosque and excavate the Roman remnants near and underneath Salah ad-Din’s grave and to create a kind of archaeological garden. More broadly, he advocated the need to open the ancient city to vehicular traffic, the only way according to him to sustain the commerce inside the city and to help restore and improve the dwellings.

With the exception of the old city, where they disagreed with the proposals, Syrian authorities were sympathetic to the plan’s modernist agenda for the larger city and its attempt to adapt it to changing times.  They generally followed Ecochard's plan with only minor modifications.