The Shahi Hammam was built in 1045 AH (1635 CE) by Hakim Ilmuddin Wazir Khan, Governor of Lahore, as part of an endowment which included the Wazir Khan Mosque. Historically, the Hammam fell into disuse probably in the 18th century during the decline and fall of the Mughal Empire and the chaos that followed. From the early British period onwards the Hammam building has been used for many different purposes other than its intended one - as a primary school, dispensary, and recreational centre as well as an office for the local municipality. Additional shops were allowed along the length of the building’s northern, western and southern façades.

The Wazir Khan Hammam, or Shahi Hammam, which is located just inside the Delhi Gate in the Walled City of Lahore and was built as public bath house by Wazir Khan during the reign of Mughal emperor Shah Jahan has been restored by the Aga Khan Historic Cities Programme, through generous financial assistance from the Royal Norwegian Embassy in Pakistan as part of the on-going project titled “Cultural Development and Environment Management.” A Memorandum of Understanding for project assistance was signed in July 2013 and the work at site started soon thereafter.

Prior to the start of present conservation work, the Hammam was in the care of Tourism Development Corporation of Punjab, and was being used as a tourist information center. Part of the building had remained occupied by tenants as shops, which only got vacated in April 2013. A prior conservation effort done in 1991 had resulted in partial conservation of the monument and exposed previously plastered over wall paintings, but had also “stopped short of fully realizing the original configuration of the bath house, its water works and its floor finishes.” The base of the building remained covered up with marble flooring.

The objective of the present conservation project was to fully explore the nature of the original building and its basic functional qualities as a bath house and to reveal and display those to the visitors in an interesting and historically correct manner. To attain this basic objective, extensive archaeological investigations and analytic studies were undertaken.

After making preparatory arrangements for securing the project site for carrying out proposed interventions, the architectural and photographic documentation to record the as-found condition of the building and its surroundings were initiated which are close to its completion. Archaeological investigations have been carried out inside the building as well as on its east and south sides on the exterior.

These excavations have revealed that substantial parts of the Hammam building were demolished in the past, probably to make way for the construction of Delhi Gate building, which was carried out at some time during the 1860s. These excavations have revealed the water heating arrangements, water disposal system and under-floor remains of its hypocaust constructions. Analyses of Hammam’s water supply arrangements, functional layout including usage of its various spaces and rooms, and other aspects of a functioning bath are in the final stages of completion. Comparative studies with respect to other Mughal period Hammams in the region and literary and archival studies have been completed to better understand the functioning of this long defunct building. 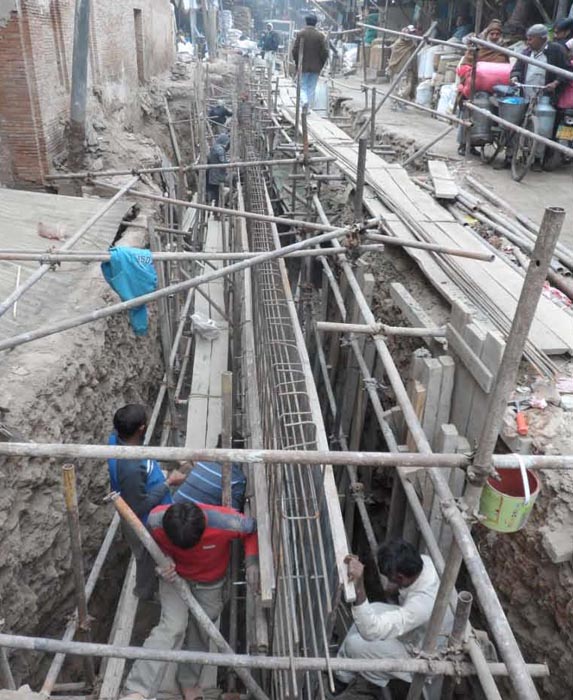