Cordoba, Capital of the Caliphate in Andalusia: A Historical Study of Urban Architecture from the Islamic Era 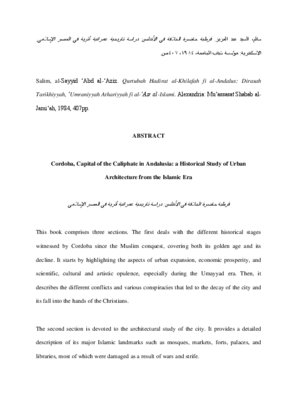 Citation
Ben Amor, Meriam. “English abstract of 'Cordoba, Capital of the Caliphate in Andalusia: a Historical Study of Urban Architecture from the Islamic Era'". Translated by Hugh Lovatt. In Cities as Built and Lived Environments: Scholarship from Muslim Contexts, 1875 to 2011, by Aptin Khanbaghi. 110. Edinburgh: Edinburgh University Press, 2014.
Description

Cordoba, Capital of the Caliphate in Andalusia: a Historical Study of Urban Architecture from the Islamic Era

This book comprises three sections. The first deals with the different historical stages witnessed by Cordoba since the Muslim conquest, covering both its golden age and its decline. It starts by highlighting the aspects of urban expansion, economic prosperity, and scientific, cultural and artistic opulence, especially during the Umayyad era. Then, it describes the different conflicts and various conspiracies that led to the decay of the city and its fall into the hands of the Christians.

The second section is devoted to the architectural study of the city. It provides a detailed description of its major Islamic landmarks such as mosques, markets, forts, palaces, and libraries, most of which were damaged as a result of wars and strife.

The third section focuses on Cordoba’s surviving architecture specifically royal palaces such as Medina Azahara and most notably the Great Mosque which is examined from both historical and artistic perspectives.

Generally speaking, the book is comprehensive, covering various aspects of the city’s Muslim history. It also features a diversity and abundance of sources referred to by the writer, both Arabic-Islamic references and books written in foreign languages. The author shows a special interest in the architectural aspect of the city. The book is an important reference for those interested in the study of Muslim Spain’s (Andalusian) architecture in particular and Islamic architecture in general.

As a result, the book might not be suitable for a non-specialised reader who might not understand the relevance of the detailed explanations. Strangely enough, despite the book’s focus on architecture, it does not contain any pictures of the city. Finally, another shortcoming in the book is repetition, as the same information can reappear in many paragraphs and chapters.