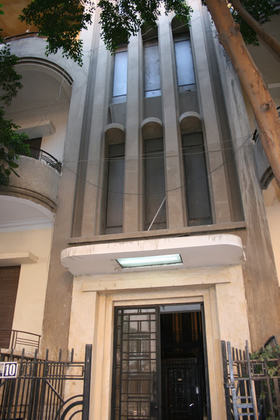 Share
In Europe, between 1925 and 1930, technological advances in The Industrial Revolution created new architectural solutions. Naval and industrial architecture began to influence Art Deco with curved forms, horizontal lines and portholes. This architectural trend of Art Deco, inspired by the Modern Movement and the precepts of “avant-garde”, reached its climax in 1937 and came to be known as ”Streamline Moderne”.
This residential building of Garden City, designed by an architect known as Adib Wahba, is a perfect example of “Streamline” style’s importation into Egypt. The building’s most striking feature is its central element divided vertically into engaged columns and horizontally into circular consoles, forming recessed zones. The main facade with rectangular openings to the exterior presents balconies with curved forms and rectilinear wrought-iron balustrades. The edifice, inspired by industrial architecture, features an ornamental simplicity defined by pure lines.
Author: Lobna Montasser