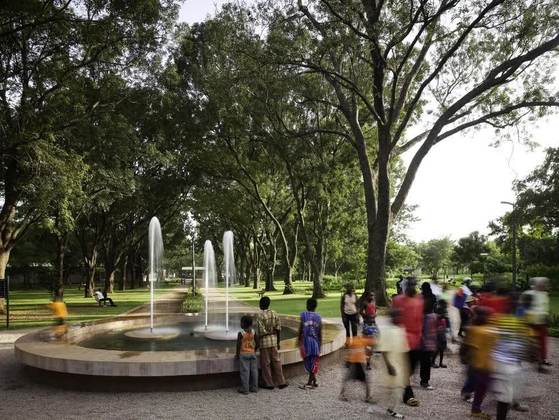 Share
Some rapidly growing cities are still blessed with large areas of forest or parkland, offering an opportunity to preserve, for future generations, a sufficient amount of green space. Yet municipalities are faced with a quandary: preserve green space and thereby ensure the liveability of a city, or allow green space to be used indiscriminately in the name of growth. In a country that boasts the fastest growing city in Africa, Bamako’s National Park of Mali provides an example of an enlightened public-private partnership that has created a permanent green space in the service of present and future generations.

The population of Bamako, the capital of the Republic of Mali, has risen rapidly in recent years, now numbering over one million inhabitants. Population growth has driven the demand for housing and public facilities. In this context, the need for far-sighted urban planning was crucial. The Government of Mali responded by outlining the boundaries of the National Park of Mali, a space of 103 hectares within a larger protected forest reserve of 2,100 hectares that forms a significant greenbelt in the city of Bamako.

Under the terms of the public-private partnership, the Government asked AKTC to concentrate on the Park’s 103 hectares (250 acres), a large, semi-circular canyon of protected forest that lies beneath the Koulouba plateau, between the National Museum and the Presidential Palace Complex. The Park is part of a larger protected forest reserve of 2,100 hectares (5180 acres).

The Park is designed to offer large open spaces for leisure and educational activities for the general public, school groups and tourists. Bringing together the National Museum and the existing Botanical Garden and Zoo into a single cultural/ecological park, featuring a comprehensive pedestrian circulation network and formal promenades throughout. It contains fitness, jogging, cycling and mountaineering tracks of varying difficulty and diverse interpretive awareness trails for botany, birds and nature. The garden spaces feature indigenous flora in varied settings, from open lawn areas to flower gardens, wooded areas and a medicinal garden. Interpretive educational signs and displays and the development of trained guides are expected to offer new educational experiences for visitors.

Phase 1 included the rehabilitation of 17 hectares of open spaces and the redevelopment and integration of eight existing facilities. The architect Diébédo Francis Kéré, an Aga Khan Award for Architecture recipient in 2004, was commissioned to design a primary and secondary gate, an entry building, a youth and sports centre, a restaurant, public toilets and several kiosks.

Since its opening in 2010, the National Park of Mali has attracted an average of 500,000 visitors per year.