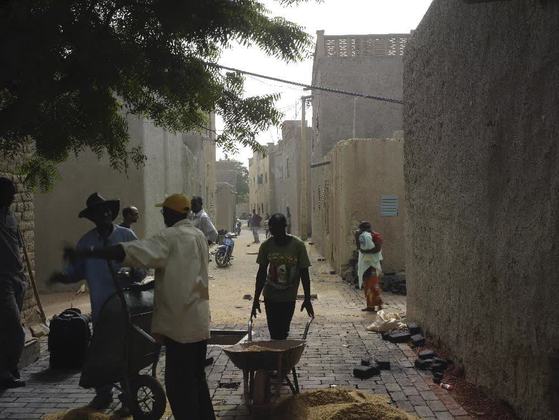 Share
Situated at the junction of the Bani and Niger rivers, the city of Mopti in Central Mali has developed over the past one hundred years from a modest settlement into an important urban and administrative centre that reaches out to both the north and east of the country. In addition to its access to river traffic, the city is also well connected to Mali’s road network. A twelve-kilometre causeway across an area of seasonally flooded agricultural land, which was constructed during the French colonial period, links Mopti with the national road network. More recently an international airport was added, which receives a fair number of foreign tourists whose main destinations are principally the Pays Dogon and the nearby historic city of Djenné.

Mopti’s strategic location at the confluence of two major rivers has also become its major constraint to further development. During the months of November to February, when the waters of the Niger and Bani are at their highest levels, the city becomes a virtual island with only the causeway as its connection to firm ground. Mopti’s population, currently estimated at more than 125,000, is squeezed during this period into an area of not more than 2.5 square kilometres. Not surprisingly, a parallel city has developed over the years at Sévaré, at the other end of the causeway, where there are no restrictions to growth.

As a result of population pressure and overall low levels of development, living conditions in Mopti, particularly in the areas around the harbour and in the adjacent districts of Komoguel and Gangal, have steeply declined over the past decades. Water and sanitation are in a very poor state, a situation that is being aggravated by the absence of a proper system for waste collection and by unpaved streets with open sewers.

The major objective of the intervention of the Historic Cities Programme (HCP) in Komoguel is to improve existing living standards in a limited geographical area of Mopti by focusing on improved health and sanitation conditions. In order to achieve this, a series of limited interventions aimed at improving existing sanitation conditions in an area confined to the immediate surroundings of the Great Mosque of Mopti have been implemented since June 2006.

The Centre for Earthen Architecture was constructed as part of the Komoguel Improvement Programme.