Architecture on the Fringes: Oman 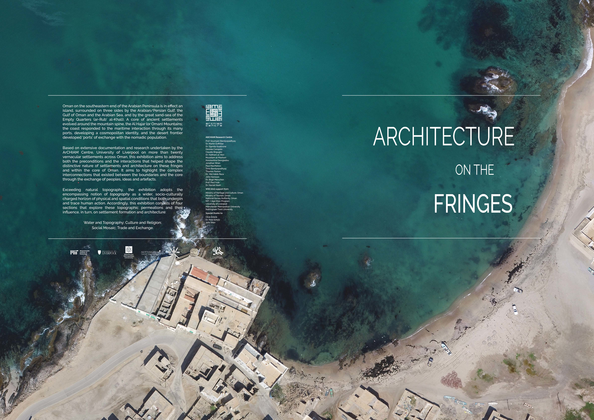 Oman in the Arabian Peninsula is effectively an island, surrounded on three sides by the Arabian/Persian Gulf, the Gulf of Oman and the Arabian Sea, and by the great sea of sand known as the Empty Quarters (ar-Rub' al-Khali). The core, for millennia, developed around the mountain spine, the Al Hajar (or Oman) Mountains. The coast responded to the maritime interaction through its many ports, developing a cosmopolitan identity, while the desert frontier developed 'ports of interaction' with the nomadic population. While this has been acknowledged by many geographers and historians, their impact on the cultural landscape and architecture has not been adequately identified. Through key instances – and without attempting to be comprehensive – this exhibition aims to address both the preconditions and the interactions that helped shape the distinctive nature of settlements and architecture on the edges and within the core of Oman. It aims to highlight the complex interconnections that existed between the boundaries and the core through the exchange of peoples, ideas and artifacts. The study of Omani settlements is significant not only due to its still-extant large concentration of vernacular settlements but importantly also given the long continuity of rich settlement history extending back to at least the 3rd millennium BCE.

Typically the desert frontier settlements were market towns that specialised in the exchange between settled and nomadic tribal groups (Ibn Khaldun's terms, badw and hadr). Nomadic and semi-nomadic groups moving in from central Arabia, over time, had complex interaction with settlements and the settled people. Their perceptions were characterised by notions of purity and trust, shaping understandings of boundaries and territories. A number of such groups eventually became sedentary in and around the outlying centres of Adam, Sinaw, Manah, etc., and influenced settlement and defences. However, these outlying oasis centres of habitation were by no means immune from the influences extending from the coast and the wider maritime world within which Oman existed. This is perhaps best exhibited by the Chinese porcelain inserts into the decorated prayer niches (pl. maharib, s. mihrab), as well as the discovery of early-Islamic coinage from Sinaw.

The developments, exchanges and upheavals in the main cosmopolitan ports of Suhar (until early-12th century CE), Qalhat (until 16th century) and Muscat, on the other hand, exerted influences over the hinterlands and beyond in shaping another distinctive identity. The cosmopolitan influences introduced into the port towns resulted in the immediate hinterland becoming the ground for socio-cultural and political interaction. The larger towns of Muscat and Muttrah, as well as the smaller fishing villages (e.g., Bandar Jissah) experienced diverse influences. These ranged from the Portuguese introduction of new defensive measures to the extended influence of trading Sunni groups from the northern coast (Ra's Al-Khaimah/ Sharjah) on settlements and sacred architecture. With Muscat's growing importance, the immediate hinterland (e.g., Bawshar) became the location of many reorientations.

Some of the deeper continuities in Omani architecture could be detected within the core settlements along the mountain spine. These settlements, based on ancient irrigation systems dating back to the 1st millennium BCE, vary in size from large oases on the plains to small hamlets within the mountain range. Such continuities however existed within a complex social mosaic that altered over time, periodically resulting in cohesion or disintegration. Settlements expanded and were shaped as new alliances were formed between tribes and wealth became available. Equally, strife resulted in significant reorganisation of settlement fabric.

Using original urban, architectural and ethnographic documentation (drawn, photographic) undertaken by ArCHIAM, the exhibition will explore various aspects of the Omani condition. These are structured around four key themes, a) Topography and Water; b) Religious Exchange and Cultural Perspectives; c) The Social Mosaic; and d) Trade and Exchange.

This is a virtual version of the exhibition currently on display in Rotch Library at MIT until May 2016.