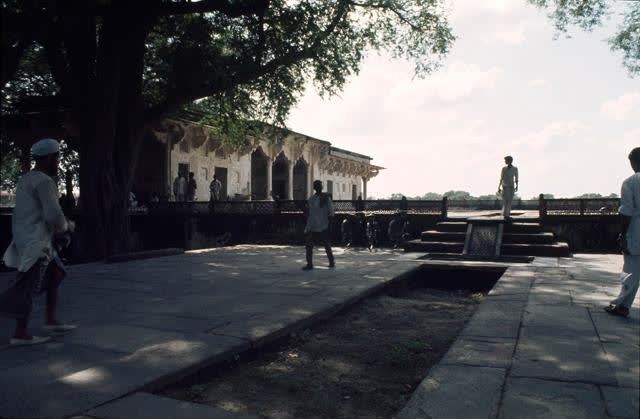 Share
Ram Bagh, located on the east bank of the Jamuna river approximately one mile north of the Itmadu Addula mausoleum at Agra, is believed to be the first Mughal garden that was laid out by Babur in 1526.

The origin of the name is disputed: some suggest that "Ram Bagh" is a corruption of the Persian "Aram Bagh" (Garden of Rest), while others attribute the name to the Hindu deity Rama. In addition to its name, its location and provenance is also disputed: some scholars place it in front of the mausoleum of the Taj Mahal, today's Mehtab Bagh. The author Raja Ram, in his "Tamirat Agrah," called the garden "Bagh Nur Afshan," and attributed it not to Babur, but to Raja Jawahir Singh of Bhartpur.

Babur's memoirs include notes on the landscape and land surrounding Agra:

"So ugly and displeasing were they, that the idea of making a Char-Bagh in them passed from my mind, but needs must! As there was no other land near Agra, that same ground was taken in hand a few days later."

This first Mughal garden in India reflected Babur's notion of paradise not only through water and landscaping, but also via symmetry and visual order. It served as a temporary resting place (1530-1539) for Babur's body before it was returned to his beloved Kabul. At the time, the garden was named "Gul Afshan." During Jahangir's reign (1605-1627), his wife Nur Jahan took control of the garden, renaming it "Nur Afshan" (Diffuser of Light) in 1621. In addition to the name, Nur Jahan made many other changes in the garden, but it is unclear if she ordered building construction on the site, or if she focused her efforts on the garden's plantings.

Today's Ram Bagh is a rectangular garden, oriented east-west, measuring approximately 335.28 meters by 259 meters. It is subdivided into six by seven rectangles (seven along its east-west axis, six on its north-south axis), a variation on the classical Persian chahar bagh. The design of the classical chahar bagh takes its inspiration from the four rivers described in the Quran: one of wine, one of honey, one of milk, and one of water. A traditional chahar bagh features a central water source, which streams outward in four directions over a symmetrical ground plane; the garden is ultimately divided into four equal areas by these four streams.

Accessible by land or from the river, the Ram Bagh is laid out on flat ground, with the exception of a terrace on its western end that occupies six of the inner rectangles. The wall of this terrace is ornamented with arched niches. Two structures of similar shape are located atop this terrace; oriented east-west, with the river along their western side, they face on another. Each of the pair contains five sections: an open iwan followed by an enclosed room, then another open iwan, another enclosed room, and a final open iwan. Between the two structures lies a sunken water tank. Water flows from this tank toward the lower level of the garden through canals and the modest use of chadars (ramps engraved with patterns to enhance the appearance of the flowing water) that transfer the water from one level to another.

The Ram Bagh has been recently renovated (2000s) and is now a public park. However, it no longer has an active water source, and its tanks and canals remain dry.