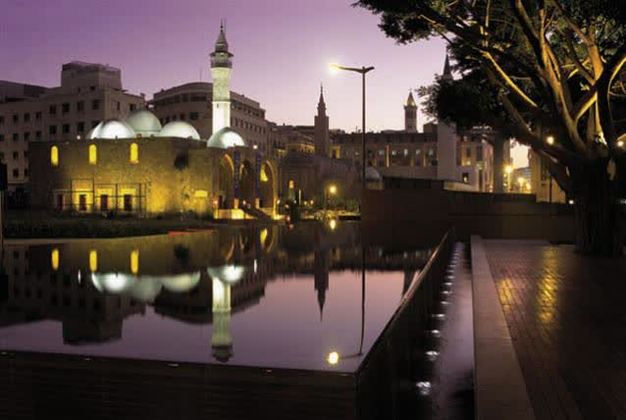 Share
Recipient of the Aga Khan Award for Architecture in 2007.
Square Four (renamed Samir Kassir Square in 2006) is a small, more or less rectangular, public space that occupies a site of 815 square metres in the heart of the Beirut Central  Business District (CBD). It is bordered by buildings on three sides and by a street on the  fourth, or eastern, side. The square is defined by two large ficus, which are amongst the few  mature trees in the area, and are large enough to shade most of the space. A reflecting pool with water cascading over its edges marks the border between the street and Square Four. The pool is flanked on the west by a rectangular timber deck that also encircles the two ficus trees. In turn, the platform is bordered on the west by a solid stone bench that is about 20 metres long. The western side is defined by a bermed area that accommodates the downward slope of the site. This bermed area is planted with a ground cover of dwarf Natal plum (carissa macrocarpa), known for its dark evergreen leaves and for its white star-shaped flowers and red berries, which grow throughout the year. Square Four provides a quiet place of refuge within the busy surrounding urban context. It is marked by the shade of the ficus trees, by the sound of the water cascading from the reflecting  pool and by the carefully studied visual balance between three elements: the trees and the  ground cover; the reflecting sheet of water, and the hard-scaped surfaces of stone and wood.
Source: Aga Khan Trust for Culture