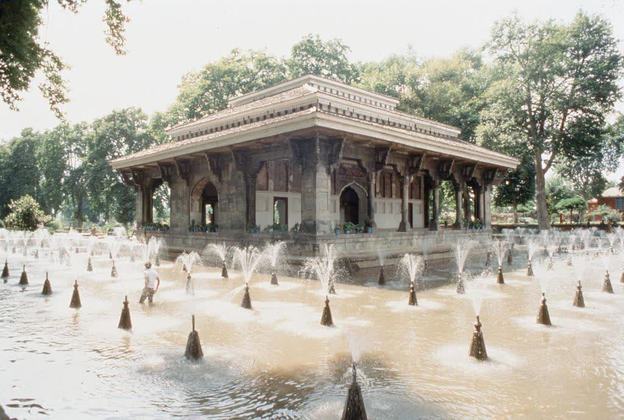 Share
The Shalimar Bagh is the celebrated royal garden of Kashmir. The name Shalimar ("abode of love") can be traced back to the name of the structure built by Pravarsena II in the 6th century CE, when the garden was a Hindu sacred site. The Emperor Jahangir was so fascinated with the garden that he called it "one of the sights of Kashmir."

Shalimar Bagh is located on the northeast side of Lake Dal, approximately fifteen kilometers away from the center of Srinagar. It was laid out by Jahangir as Farah Baksh ("the delightful") in 1619, while he was founding the city of Srinagar. In 1630, under the orders of Shah Jahan, the local Kashmiri governor, Zafar Khan, extended the garden under the name of Faiz Baksh ("the bountiful"). Under late Pathan and Sikh governors, Shalimar was treated as a pleasure resort, and during the reign of Ranjit Singh, European visitors were housed in its marble pavilion before the Maharaja Hari Singh installed electric lights. The site of Shalimar seems to have been ideally suited to a garden; it contained a natural canal, and a small nearby spring-fed stream was diverted to the garden site to provide continuous running water.

Covering an area of approximately 12.4 hectares, the garden is rectangular in shape and measures 587 meters long by 251 meters wide. It is oriented northeast to southwest, with the highest point located along the northeast side. Although it is not located directly on the lake shore, it is connected to Lake Dal by a long canal, and the formal approach to the garden is through this canal. It can now also be reached from the road that runs around Lake Dal.

Shalimar Bagh is an adaptation of the formal Persian chahar bagh, traditionally uniform in shape, with a water source in its center and four radiating streams that divide the garden into four sections. Like other Mughal gardens around Lake Dal, Shalimar adapts the chahar bagh to the mountainous topography by emphasizing the central water channel; the secondary channels are minimized or removed from the design, and the source of water shifts from the center of the garden to its highest point. Thus the central water canal of the garden (shah nahar) forms its main axis, uniting the three terraces with their regularly placed fountains and chinar (sycamore) tree-lined vistas. Beginning at the top of the garden, the canal runs through each of the baradaris (pavilions) in the garden. At each terrace, the canal flows into a larger pool, highlighting its baradari. Within the Shalimar Bagh, each of the three terraces had a different function and level of privacy: a public garden (first terrace), a private garden, also called the Emperor's Garden (second terrace) and the zenana (harem) garden, on the third terrace.

One accesses the garden, after arriving by water taxi or by road, through two small pavilions at street level that lead to the public garden on the first terrace. A large baradari, the Diwan-i 'Amm (public audience hall), where the emperor held his daily court when in Kashmir, is located just above the entrance gates. A black marble throne surrounded by water cascades forms the central feature of the Diwan-i 'Amm.

Continuing up along the axial canal to the second terrace, one reaches the (former) Diwan-i Khass, or the private audience hall, accessible only to the noblemen or guests of the court. Of the Diwan-i Khas, only the stone footing remains. The fountain pool of the Diwan-i Khass supplies the canal as it runs down to the Diwan-i 'Amm, and in turn, it is supplied by the fountain pool on the third level, the zenana garden. Moving upward from the second terrace and the Diwan-i Khass, chinar trees flank the axial water channel as it approaches the zenana garden. Two small pavilions mark the beginning of and control the access to the third level, which was reserved for the royal harem. The zenana garden houses a baradari of black marble called the Black Pavilion, which is surrounded by a fountain pool that is supplied from a higher terrace. Behind the pavilion, a double cascade falls against a low wall with small niches (chini khanas) cut into it. Two smaller, secondary water canals lead from the Black Pavilion to small baradari. Above the third level, two octagonal pavilions define the end wall of the garden.

The Shalimar Bagh is well known for its chini khanas, or niches, behind garden waterfalls. These niches, which once held oil lamps, now hold pots of flowers, so that their colors will be reflected behind the flowing water. Today, the garden is a public park.

Rehman, Abdul. Earth Paradise - The Garden in the Times of the Great Muslim Empires, 94-96. Lahore: Habib ur Rehman Research Foundation, 2001.