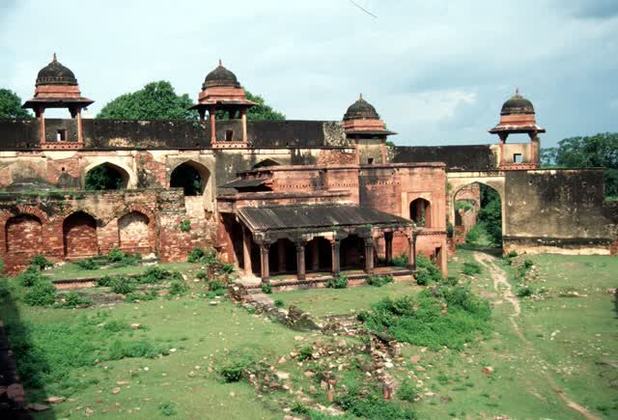 Share
Fatehpur Sikri is a palace complex, built by the Mughal Emperor Jalal’ud-Din Muhammad Akbar (reg.1556-1605), son of Humayun and grandson of Babur. The palace complex is situated on the ridge of a hill about 40 meters in height by the side of an artificial lake.

The earliest building constructed by Akbar in this specific site, in 1569, was a small palace called the Rang Mahal. According to the legend recorded by chroniclers, Akbar moved his pregnant wife to Sikri after its resident saint Salim ad-Din Chisti prophesied (correctly) that the childless emperor would have three sons. In addition to this legend, there are differing schools of thought about whether Akbar’s 1572 move to Sikri was only a residential move for the emperor or if Akbar intended to found a new capital for the Mughal empire. The prefix "Fathabad," which became Fathpur by common use (both mean "City of Victory") was added by Akbar in I573 when he returned victorious from his Gujarat campaign.

Akbar’s interest in Fatehpur Sikri was justified by the history of the site associated with his ancestor Babur, as well as by its strategic position. The city touches the easternmost tip of Rajasthan and is located on the main route between Agra, the Mughal center of power and Ajmer, the heavily frequented annual pilgrimage site of Muin-ud-Din Chisti’s tomb. Additionally, the shift to Fatehpur Sikri could be seen as a way for Akbar to better control his nobles, composed of Rajputs, Turks, Afghans and Persians, by uprooting them from their territories and keeping them away from an economic centre such as Agra. Given that the city’s walls were not very thick, it is probable that Fatehpur Sikri was not intended to be an impregnable fortress (like Agra), but rather an administrative center.

The construction of the palatial complex begun in 1572 and progressed rapidly. There is no written evidence concerning the architects who worked for Akbar, or to which extent the Emperor was involved in the process, although he is portrayed inspecting the construction in miniatures.

There were two main phases of construction for the complex: 1572 to 1575, when the main buildings were raised and finished, and 1575 to 1585, when passages and corridors where added to the existing buildings according to the needs of the Emperor and his family. The complex served as the main residential quarters of the Emperor for fourteen years and was subsequently abandoned. In 1585, following a political and geographic shift of the empire towards Afghanistan, Akbar and his court transferred their residence to Lahore.

The Fatehpur Sikri complex is situated on a long narrow ridge of red sandstone that runs southwest to northeast. However, the buildings themselves are rotated 45 from this orientation and are aligned exactly north-south. It is possible that before Akbar’s time, this ridge already housed a number of structures. While Akbar’s buildings were oriented differently than those pre-existing structures, many of the older buildings were retained. The new mosque was oriented to the west (qibla), and the other buildings of the palace complex developed parallel to it. It is also speculated that Akbar’s complex was oriented according to the principles of Vastu, an ancient Indian architectural system. However, no written evidence exists to support the Vastu theory.

The whole complex is spread in three plateaus on receding levels with respect to the topography of the ridge. The mosque complex is located on the uppermost level of the ridge, and consists of the Great Mosque (Jami Masjid, with the tomb of Shaykh Salim Chisti incorporated into its courtyard), which dominates the entire architectural composition by means of its size, and a small palatial complex called the Nayabad quarter (including the Rang Mahal). It is possible that Akbar and his family lived in the Nayabad quarter while the palace was under construction.

The palace complex is laid out on the two lower platforms, covering approximately 250 square meters. The buildings of the complex can be grouped in two main zones. The middle plateau is the most private, housing the residential buildings: the northern palace (Birbal's Palace), the Shaqh-i Isbal (Jodh Bai’s Palace), the Sonahra Makan (Miriam’s Palace), the guest house (hospitalia) and the stables (Shahi Bazar and Mina Bazar).
The lowest plateau is occupied by the public and semi-public areas of the palace complex, comprising the public audience hall (Diwan-i 'Am), the (attributed) private audience hall (Diwan-i Khass), the Ank Michauli and Astrologer’s Seat, the Panj Mahal, the imperial apartments (Khwabgah), the royal quarters (Daulat Khana), including the library (Kutubkhana), the state archives (Daftar Khana), the Anup Talao pavilion and the storage house (Abdar Khana). Most of the buildings of the public and semi-public area face east, while the Khwabgah faces north.

Other buildings, such as the imperial caravanserai, the Hiran Minar tower, the hammam, and the so-called Treasury and Mint are articulated into the natural gradient of the ridge, ignoring the orientation of the palace complex. The Elephant Gate (Hathi Pol) is found to the north and west of the zenana area, as are the caravanaserai, the Hiran Minar, and the northern waterworks associated with the gate. The palace complex is organized, on the different levels, without one single axis dominating the complex; rather, the complex is a series of linked spaces, with access increasingly restricted via gateways as one approaches the private spaces reserved for the emperor and his court.

Most of the aforementioned structures have been assigned a function and a name; however, only a few have been definitively identified and named. Most of the popular names for the Fatehpur Sikri structures are romantic rather than descriptive of the building’s function during Akbar’s time. Of the sixty buildings described by Akbar’s chroniclers, forty are still extant, and of these only thirteen have been authoritatively described.

There are two main approach routes to the palace complex, both following the natural gradient. The first, from the west, passes along the artificial lake and the northwestern wall of the Grand Caravanserai, arriving at the Elephant Gate (Hathiya Pol). Two miniatures from 1590 identify the Elephant Gate, which is the largest and most elaborate of the city gates, as the royal entry to the palace complex. After passing through the Elephant Gate, two paths appear: one to the right of the gate passing above the Grand Caravanserai before turning toward the northern wall of the Jami Masjid, and another the left of the gate that stretches along the northern end of the ridge, leading to the northwest entrance of the Diwan-i 'Am and, through a private door, to the Imperial Apartments.

The second approach to the palace complex from the east connected Sikri with the larger town of Agra. A traveler would first traverse the Agra Gate, pass through the Chaqar Suq, and then pass the Mint and the Treasury. This path terminates in an angular arrival court to the northeast of the Diwan-i 'Am.
The Elephant and Agra Gate are two of the eight gates that pierce the six kilometer long stone-wall (parkota) built by Akbar to fortify the city of Fatehpur Sikri. This parkota runs along the three sides of the ridge - north, east and south - in an approximately rectangular shape. The lake serves as a natural barrier to the west.

Recent studies of the Fatehpur Sikri complex show that the palace and the mosque complex are based on a system of proportional modules and ratios. The composition of the plan of the complex can be described by dynamic symmetry, a proportioning system that uses a series of rectangles based on the square root of 2 and the square root of 3, (the ratio of height divided by width) as well as rectangles based on the golden mean. In addition, the whole city plan could be organized on the basis of a unit called a gaz, approximately 81.28 centimeters. The architectural structures, the defensive walls, the main gates, and the road network are based on a maxi-grid of 8 squares of 1000 gaz per module. Each module in its turn is divided into a sub-grid based on sub-modules of 500 and 250 gaz. This sub-grid determines the dimensions of the various architectural structures.

All the surfaces of the complex (horizontal and vertical), the structural and spanning systems, and the unifying, variously patterned pavements are fine-quality red sandstone. Stones used for the palatial structures were prefabricated in standard dimensions while still in the quarry and later modified and installed. The overall structural system is trabeated, with the exception of some mixed structures of rubble masonry and some small domed pavilions. The standard construction module consists of four pillars and four horizontal beams with a capital in between; the flat roofs are composed of long flat pieces of stone.