Architecture in Muslim Communities from the Maghreb to Sumatra 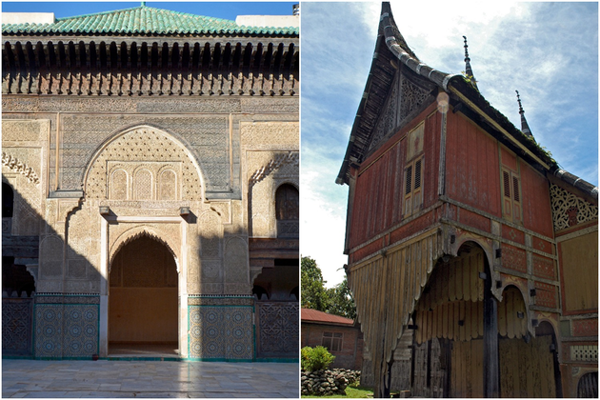 Share
Statement by photographer and curator, Barbara J. Anello
This exhibition focuses on the historic and vernacular architecture of communities that are now or once were Muslim, from the Maghreb and Andalusian Spain through Turkey, the Hijaz, Bahrain, Bangladesh, Vietnam, and North Central Sumatra.  Throughout these areas a shared vocabulary rose through the crafts of weaving, carving, and zellij (mosaic); materials such as stone, earth, wood, plaster, bamboo, and reed; and a repertoire of natural and geometric motifs.  Simultaneously a diverse forms and patterns arose as a result of the distinctive climatic, ecological, and geographic circumstances in each part of the territory depicted in these images. In the structures shown we can read shifting geo-political, ethnic, spiritual, economic realities that changed over time. The exhibition is not simply a catalogue of the already well-documented forms and motifs of architecture in the Muslim world: domes and arches, the layouts of mosques, tombs, and other monuments; the decorative and geometric motifs found in mosaics, carved wood, and stucco.  Rather the images are chosen to demonstrate the inventiveness of local, vernacular solutions demonstrated by the ingenious use of readily available materials, the strategies used to protect from and mitigate the effects of severe climate conditions, and the honing of traditional motifs and methods over time.

The structures shown in these photos demonstrate the inventiveness and pragmatism of local builders, but the current condition of some structures also reveals how they have adversely affected by modern conditions in which the structures are neglected, and the communities that inhabit them increasingly impoverished.  Development, whether planned or unregulated, too often leads to the destruction of communities and the structures built by them. Modernization is embodied by skyscrapers, elevators, air-conditioning and intentionally wasteful consumerism. Traditional villages and centuries old vernacular architecture is too often left to the poorest, most elderly citizens.

Polluted seas, melting icecaps, deforestation, and climate change are evidence of the kind of increasing environmental devastation that makes it imperative for architects and designers to play a role in reversing the rampant destruction of the environment. Revitalizing urban design in a way that connects architecture to local history and landscapes can give communities to a sustainable future. By combining vernacular architecture and cutting-edge technology, designers can address contemporary needs by developing forms, materials, and techniques that respond to contemporary needs in ways that are relevant, locally-sourced, and sustainable.

The structures, skills, and motifs shown in the photographs, although disparate, are connected in sometimes surprising ways:  the coral, tower houses of 19th century Jeddah, have roshans carved from Sumatran, decorated with Indian cotton and Afghan carpets, and set with Chinese porcelain. In some instances, they were also designed by Turkish architects. The intricate zellij of the Alhambra is an example of a skill still practiced by the artisans of Fez, some of whom recently traveled to Manhattan to create new galleries in the Metropolitan Museum of Art. The ancient art of weaving, used not only to create fabric, but also to weave wool, bamboo or reed into walls, tents, sails, roof, and other building materials, is still practiced. In these ways artisans and local builders carry forward ancient traditions proven effective over millennia to mitigate extreme heat and cold, conserve fuel and energy, provide shelter, and accommodate the activities of daily life. The United Nations now recognizes that the “creative economy goes beyond classical economics to embrace a new paradigm of development that includes social and cultural dimensions”  UNESCO’s criteria defining world cultural heritage, both tangible and intangible, states “that it should bear an exceptional testimony to a living or threatened cultural tradition and that it should be directly or tangibly associated with events or living traditions, with ideas, beliefs, or artistic works of universal significance.”1

These photographs chosen for this exhibition bear witness the applicability of local solutions to design and construction problems, and record the continual flux of knowledge, skills and aesthetics. In addition to conveying the complexity of cultural and historical exchange, they reflect my personal experience. I lived in Indonesia (1985-88 and 1991-2002); worked with Moroccan women weavers of the Middle Atlas (2006-8), and taught in Chittagong (2010), Vietnam (2008, 2012-13) and Jeddah (2014-16).

There are no one-dimensional identities; heritage is a complex meld of historical, geographical and ethnic patterns, persisting but altering over time. Some examples are well known, such as the Great Mosque and Cathedral of Cordoba, a world monument, acclaimed for its historical and architectural significance to Christianity and Islam. Others are less well known, such as the Cham towers of Central and South Vietnam. Fewer than thirty of these structures, built between the 6th and 17th centuries, still stand. In the style of Shivite Hindu-Buddhist temples, these towers attest to centuries of exchange between India and Southeast Asia. An ethnic minority in Vietnam and Cambodia today, the Cham, who converted to Islam during the 16th century, regard these ancient structures as centers of worship and links with their ancestral heritage.

These photographs, some of which illustrate HABITAT: Vernacular Architecture for a Changing Planet, ed. Sandra Piesik, Thames & Hudson and Abrams, 2017, are evidence of the art and skill of builders, whose inventive design solutions, skills and structures, enrich us all.