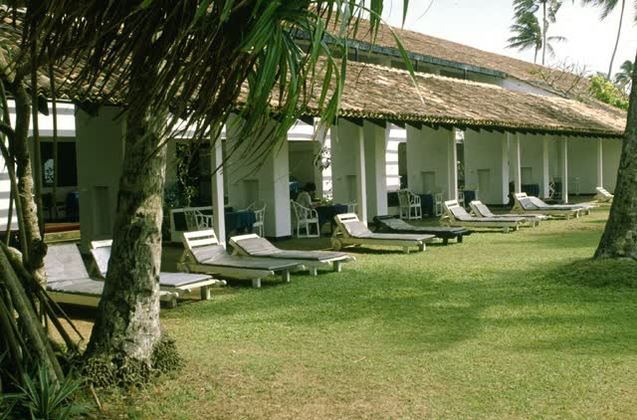 The Serendib Hotel was developed in tandem with the Bentota Beach Hotel, though it was completed a year later than its neighbour and conceived as a budget-priced rest house for travelers. Approached down a narrow road running beside the railway line, the hotel presents to the world a long blank wall broken only by a deep porte cochère. The plan consists of two long parallel buildings enclosing a string of courtyards, the building on the street side containing offices, kitchens and service spaces, while that facing the sea contains two floors of accommodation flanking a central dining room.

The layering of space is similar to that set up in the house for Ena de Silva. A series of longitudinal strata was established between the railway track and the ocean: the street, the porte cochère,  the service wall, the garden, the access corridors, the lines of bedroom cells, the private verandahs, the coconut grove and the beach. A single cross-axis pierces these strata like a skewer, proceeding from the porte cochère across the central courtyard past a peacock pen to the reception desk and continuing along one side of the restaurant and beyond through the trees to the edge of the ocean.
The original building has forty-four rooms, twenty on the ground floor and twenty-four above, the lower rooms opening into small courtyards with covered verandahs beyond, while the upper rooms open onto balconies. All were designed to function without air­ conditioning and fitted with timber lattice louvres to encourage cross-ventilation, but this led to problems of noise transmission from the corridors and later the rooms were sealed and air-conditioned. A simple restaurant spills out onto the lawns, where open sitting areas are protected by triangular sails of orange and brown canvas stretched between the trunks of palm trees. The original design proposed roofs of coconut thatch and floors of raked sand, but the complete building employs roofs of clay tile on cement sheeting with terracotta floors.
The hotel proved very popular and it was extended towards the south in 1974 with a new block containing a further thirty rooms, a swimming pool and a poolside cafe. The link between new and old was formed by extending the gable of the original block to create a deep loggia facing the pool. The cafe is a masterpiece of sophisticated simplicity: its roof trusses sit on beams that cantilever out from the columns in a manner recalling the roofs of the devale at Embekke, while the glass screen wall dances in and out between the columns, creating a syncopation of internal and external space. Bawa also effectively solved the problem of noise transmission in this block: the corridors are enclosed and separated from the rooms by small open courtyards, with pairs of rooms connected to the corridor by narrow bridges and staircases.
Source: Robson, David. 2002. Geoffrey Bawa: The Complete Works. London: Thames & Hudson, p. 102-105.