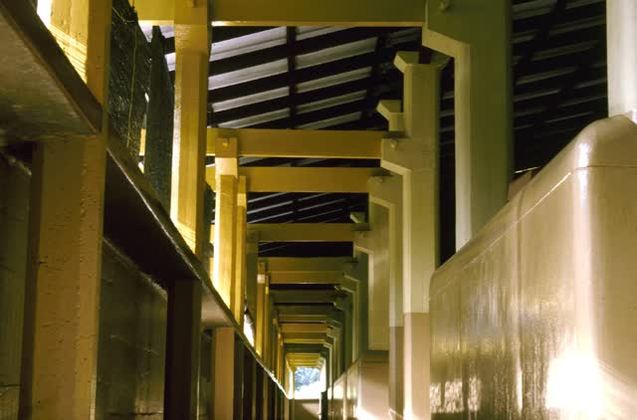 The Montessori School for the nuns of the Good Shepherd Convent was built in the grounds of St. Bridget's Convent in Colombo in 1963. Bawa developed the design with Laki Senanayake and murals were added by Barbara Sansoni.

Although the rectangular two-floor building is strategically similar to Bawa's earlier classroom blocks, the design abandons white Tropical Modernism in favour of a witty reworking of a traditional 'wattle-and-daub' village school. The upper floor is covered by a huge umbrella of Portuguese tile on cement sheeting that cantilevers far out beyond the perimeter of the classrooms to protect the interior from driving rain and harsh sunlight, its rafters elegantly supported by an articulated concrete frame. The first-floor slab sits on mushroom­ topped columns and its soffit is modelled to create a cave-like quality. Open sides and the high roof encourage natural ventilation, and surrounding vegetation helps to cool the air.

Teaching areas are delineated by low walls that create small-scaled enclosures within the megastructure of the roof and the floor slab, while toilet cubicles and storerooms occupy free-standing concrete cells with organic shapes that suggest hollowed-out boulders. Balconies and spiral staircases are cast in rough, curving concrete in a manner that is reminiscent of traditional pise construction, and small openings and decorative features are placed at 'child's-eye level'.

Bawa's architecture was generally rooted in the traditions of functional Modernism and, in spite of his admiration for the Baroque and his love of decoration, he rarely strayed into the realms of Expressionism. Here, however, the skeletal structure, the organic forms and the naive decorative patterns carry memories of Gaudi's Pare Giiell in Barcelona. The classrooms are still in good condition after thirty-five years of constant use, though repainting has destroyed the harmonies of the original colour scheme.