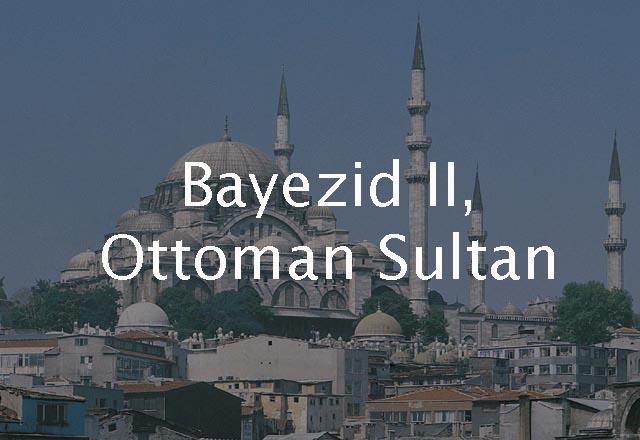 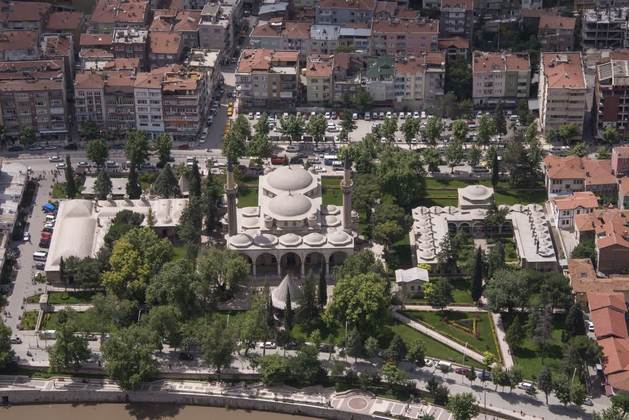 Share
The multi-functional complex of builidngs (külliye) of Ottoman sultan Bayezid II at Amasya was constructed in 1486/819 AH, five years after Bayezid II had taken the throne. Its construction is attributed to Mimar Hayrüddin, a royal architect of the Ottoman court, possibly working under the supervision of Şehzade Ahmed, sultan Bayezid II's son who at the time had assumed the governorship of Amasya. Situated within a park on the south shore of the Yeşilırmak, the complex contains a congregational mosque (cami), a madrasa (medrese) and a complex containing a soup kitchen (imaret), library, and timekeepers' room (muvakkithane).
The mosque's plan is composed of a large, rectangular prayer hall oriented north-south fronted with a portico or porch on its north side. Two minarets rise from the east and west ends of the porch. The porch is five bays wide, with each bay covered by a small dome. A monumental portal with a muqarnas hood vault leads visitors from the porch into the prayer hall. The prayer hall is divided into two bays: north and south. Both are covered by domes resting on octagonal drums, the north bay being slightly smaller than the south bay, which precedes the mihrab.
To the west of the mosque is the madrasa building, which takes the form of a u. A portal on the north leads onto a central courtyard surrounded on three sides by arcades giving onto domed cells. On the southern side, the domed portico gives onto a larger domed prayer hall.
To the east of the mosque is an L-shaped complex that houses the soup kitchen, library and time keepers' room.
On the southern side of the mosque is the tomb of Sehzade Ahmet: a simple domed cube preceded by a small porch.
Sources:
Gabriel, Albert. Monuments Turcs d'Anatolie, 33-41. Paris: Editions de Boccard, 1931-1934.
Goodwin, Godfrey. A History of Ottoman Architecture, 151-156. London: Thames and Hudson, 1971.