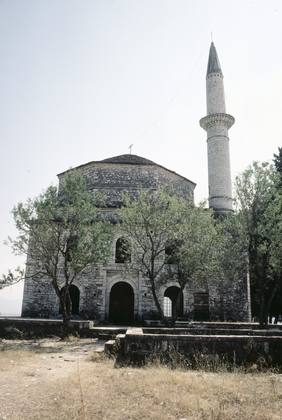 Share
The Fethiye Mosque is located in the southeastern section of the citadel (Ic Kale), near the Byzantine Museum. The present form of the mosque dates from the time of Ali Pasha (r. 1788-1822/1202-1237 AH), probably in the early 19th century, and is a complete reconstruction of an earlier mosque on the site. The earlier mosque is mentioned in sources as one of the earliest mosques in the area, giving it the name "Fethiye" (of the Conquest).
The mosque has a square plan, with a minaret at the western corner. On the west and north sides the floor remains from a no-longer-extant portico. The prayer hall, covered with a hemispherical dome, has a wooden balcony supported on stone columns at its western end. The tomb of Ali Pasha is located to its north side. Interior painted decoration is preserved, and the rococo plaster decoration of the mihrab is particularly striking. The mihrab also incorporates two marble mullions with carved reliefs, originally from the iconostatis of a Byzantine church. At the center of the dome is a large medallion with vegetal and geometric patterns, and a wide band of vegetal designs and Koranic calligraphy runs around the base of the dome. The present decoration is attributed to a second phase of construction.
After the liberation of the city of Ioannina the mosque became part of the hospital, and then became a military building until the Ministry of Culture took ownership in 1970. Today it is used as a museum. Restorations of the building have taken place over the years, including a restoration of the west side in 1970; repairs to the dome, balcony, pavement, and other features in the later 1980s; conservation of the walls from 2005-2008; and repairs to the roof in 2008.
Sources:
Brouskarē, Ersē, and Elizabeth Key Fowden. Ottoman architecture in Greece, 162. Athens: Hellenic Ministry of Culture, Directorate of Byzantine and Post-Byzantine Antiquities, 2009.
Mikropoulos, Tassos A., ed. Elevating and Safeguarding Culture Using Tools of the Information Society: Dusty traces of the Muslim culture, 380-381. Ioannina: The Educational Approaches to Virtual Reality Laboratory, University of Ioannina, 2008.