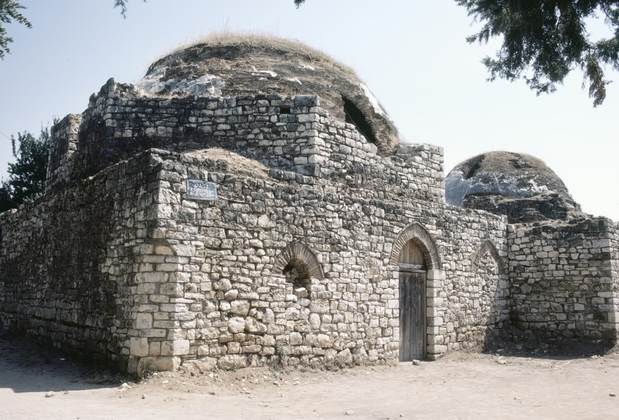 Share
The Citadel Hamam is located in the Kastro, outside of the northeastern citadel. It is one of the earliest surviving Ottoman monuments in Ioannina, and seems to have replaced a Byzantine bath located further to the north. It is a one-story structure, 25.80 m x 13.30 m, constructed of masonry composed of limestone mixed with brick and small flat stones, with brick domes and pointed arches over openings and niches.
There are four main rooms in the bath complex:
The frigidarium is a rectangular hall with a dome. There are niches in the walls, one of which is a mihrab-type niche decorated with stalactites. The interior is plastered and the floor is paved with flagstones. There is a sunken fountain at the center of the hall, and channel running the length of the east and north walls.
The tepidarium is a long and narrow vaulted room with hypocausts under the floor. Two small rooms are found off the west end of the space, one also with hypocausts under the floor and one that served as a lavatory.
The caldarium is the main hall of the bath. It is a cross-in-square plan with a perforated dome over the central part and vaulted eastern, western, and southern arms. In the corners are four small private rooms, each with a dome. The north walls is decorated with stalactites in a cascading arrangement. Hypocausts run under the floor.
The boiler-room is a narrow vaulted room on the south side of the building. There is a closed, vaulted reservoir at the west end of the room and a wood store on the east side.
Stabilization work has been done on the perimeter walls and hypocausts, and the domes and decorative elements have been repaired.
Sources:
Brouskarē, Ersē, and Elizabeth Key Fowden. Ottoman architecture in Greece, 165. Athens: Hellenic Ministry of Culture, Directorate of Byzantine and Post-Byzantine Antiquities, 2009.
Giarlelis, C., P. Kremezis, C. Spanos. "The Hamam of Ioannina: Analysis and Restoration."  International Symposium for Studies on Historical Heritage. Antalya: Yildiz Technical University. Research Center for Preservation of Cultural Heritage, 2007. http://equidas.com/EQUIDAS_SHH07_Hamam_of_Ioannina.pdf.
Mikropoulos, Tassos A., ed. Elevating and Safeguarding Culture Using Tools of the Information Society: Dusty traces of the Muslim culture, 376-377. Ioannina: The Educational Approaches to Virtual Reality Laboratory, University of Ioannina, 2008.