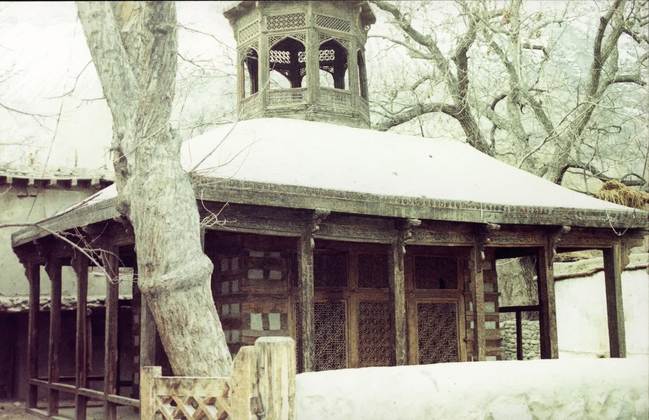 Astana Syed Mir Muhammad is located in the historic town of Khaplu in Baltistan region of Pakistan. Astanas are places of eternal rest for saintly persons so are held in reverence and visited frequently by public. Astana of Syed Mir Muhammad was built around 310 years ago by Syed Mir Muhammad's descendants. Like most astanas in Baltistan region, it is a square building topped with a conical tower. The astana has an inner square chamber enclosed by wooden jallie (carved lattice-work screens) in the Kashmiri style, with geometrically-shaped perforation.

In 1999, when Aga Khan Cultural Service, Pakistan (AKCS-P) initiated the technical study of the astana, the building was in an advanced state of deterioration. The entire structure was fragile and out of alignment, leaning 30 cm to the south west. Also half of the roof top tower was missing and the erosion of the earthern roof top had resulted in the decay of major structural members and jallie pieces. The entire structure was first documented followed by careful analysis and then actual work with low-intervention approach was started.

Similar to other projects of AKCS-P, the guiding principle in this project was also minimum intervention  and maximum retention. With this framework, original features were maintained while structural changes were minimized except those needed to increase strength and durability. The building’s aged patina and historic character were carefully retained through skillful and sensitive conservation techniques. Furthermore the approach of using local materials and construction techniques ensured that restoration work is carried out in accordance with vernacular architectural practices and can be maintained in a sustainable manner.

In the process some of the major interventions carried out were, replacement of decayed roof members, water proofing of roof, strengthening of foundation, repairs of cribbage boxes, internal finishing including replacement of wooden jallies and finally staining and oiling to prevent termites.

The total covered area of the structure is 49 m². Physical work was started in September 1999 and it was completed in April 2000.  The total cost of the project was US$ 10,000, which funded by Royal Norwegian Embassy Islamabad. The Astana project was recognized with  Award of Distinction in the 2003 UNESCO Asia-Pacific Heritage Awards.