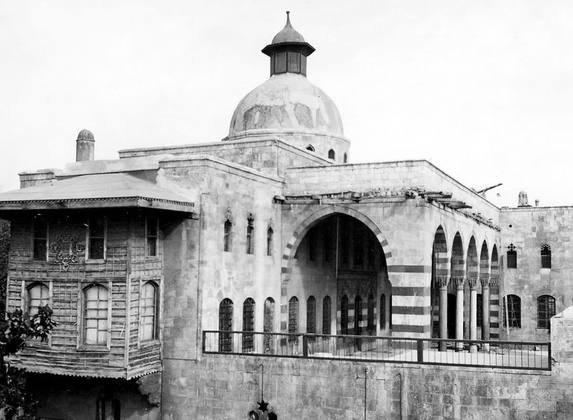 Share
Qasr al-Azm is a mansion alongside the Orontes River in the Bashura Quarter of Hama, Syria. The home is named for its patron, As’ad Pasha al-Azm, the Ottoman governor of the province, who constructed the home before his transfer to Damascus, where he built a second home, also known by his name. Construction on the house began in 1739-1740/1153 AH. A second phase of construction was completed in 1780/1194 AH. An extensive site survey conducted by the Deutsches Archäologisches Institut (DAI) between 2005 and 2007 documented numerous modifications in the palace between 1740 and 1918 when it served as the Al-Azm family residence. Once the family ceased to occupy the premises, it briefly served as school. In 1956, Qasr al-'Azm was converted to a museum housing archaeological finds from the region. The structure was damaged in the bombardment to suppress the 1982 uprisings in Hama, and restored after 2005 by the DAI.
The plan:
The palace sits close to the Orontes, overlooking low-lying riverfront gardens on its east side. It is built on multiple stories to accommodate for the terrain that slopes down toward the river. The home contains over seventy rooms and is arranged about three courtyards. The primary courtyard (first courtyard) occupies a rectangular space on the ground floor toward the western side of the complex. A large iwan opens off the southern end of the courtyard, and is flanked by two smaller covered rooms, which also overlook the court through windows. The courtyard gives access to other rooms on the east, west, and north sides.
A Passage on the east side of this first court leads onto a series of larger interior rooms arranged as a block that supports a second story. These rooms included stables and fodder storage.
The second story above the stables and storage block of the courtyard is accessed through a staircase on the passage off of the first courtyard. It leads onto the building's second courtyard, which overlooks the first courtyard over a balcony on its west side. The second courtyard is bounded on the south and east sides by rectangular room, and on the north side by a large portico with five arches that fronts the most important space in the house: the reception hall or qa'a. An octagonal fountain occupies the center of this courtyard.
The reception hall's entrance is through an arched doorway flanked by two windows set into an ablaq frame under the central bay of the five-arched portico off the north side of the second courtyard. Through the entrance, one steps onto a central bay with a sunken marble floor (known as an 'ataba). An ornate stone fountain occupies the center of the 'ataba, and a dome covers it. Four arches surrounding the 'ataba support a drum which in turn supports the dome. The transition from arches to drum is made through muqarnas pendentives. The 'ataba gives onto three iwan-like side rooms on the north, east, and west sides (these spaces are known as tazar, pl. tazarat). The lower parts of the walls in these three side rooms are covered with inlaid and painted woodwork ('ajami) surmounted by a cornice. The upper parts of the walls above the cornices are pierced by tall stained-glass windows. The back walls of the eastern and western side rooms give onto inner rooms, which contain cantilevered window boxes overlooking the surrounding terrain.
On the north side of the first courtyard on the ground floor is a wing that was added to the palace in 1780. This wing is arranged around the third, smallest courtyard, which occupies a rectangular space along the western wall of the complex. The courtyard gives access onto a large room on its east side, a bath on its south side, and a staircase occupies the north wall, leading to an upper floor with an arcaded balcony overlooking the courtyard and giving access to several small living or sleeping rooms. This part of the house was the selamlik, or men's quarters.
Stables occupy the part of the northern wing behind the rooms surrounding the third courtyard on the ground floor.
Sources:
Burns, Ross. Monuments of Syria: An Historical Guide, 125-126. London; New York: I.B Tauris & Co., 1992.
Macaulay-Lewis, Elizabeth. Bayt Farhi and the Sephardic Palaces of Ottoman Damascus in the Late 18th and 19th Centuries, 70-75. Boston: American Schools of Oriental Research, 2018.
Maṣrī, 'Abd al-Raḥīm, and Kāmil Shahāda. Qaṣr al-'Aẓm fī Ḥamā. Ḥamā: Maṭābi' al-Iṣlāḥ, 1965.
Nilsson, Alexandra. Hama and Jabla: Watercolours 1931-1961 by the Danish Architect Ejnar Fugmann. Aarhus; Oakville, CT: Aarhus University Press. 2002.
Ragette, Friedrich. Traditional Domestic Architecture of the Arab Region. Fellbach: Edition Axel Menges. 2003.