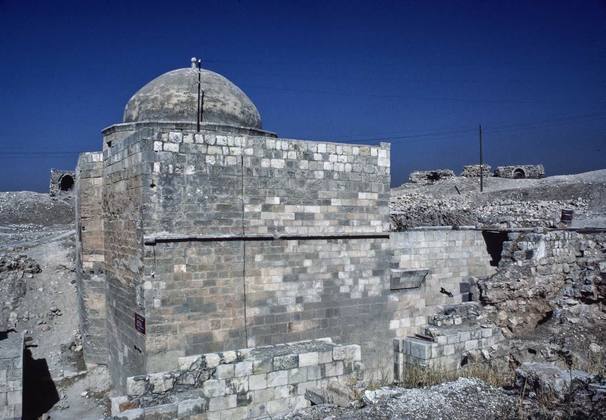 Share
A small mosque located on the Citadel of Aleppo dedicated to the prophet Abraham is known as Maqam Ibrahim or simply the Small Mosque (al-Masjid al-Saghir). It is also called Maqam Ibrahim al-Sulfi (Lower Maqam Ibrahim) to differentiate it from the Great Mosque, also dedicated to Abraham, which sits further up the hill. An inscription plaque in the small mosque dates the building to 1168/563 AH and names the Zangid sultan Nur al-Din Mahmud as its patron.1
The mosque consists of an irregularly shaped unit with three main parts: a rhombus-shaped courtyard, a rectangular prayer hall on the south side of the courtyard oriented toward the qibla, and a block of three deep covered spaces on the west side of the courtyard aligned at an angle to the prayer hall. The west side of the complex is bordered the narrow stepped lane leading from the citadel's Entrance Block up the hill to the Great Mosque. A gateway communicates between the lane and the courtyard.
The prayer hall consists of three bays. The central bay before the mihrab is covered by a dome that rests on an octagonal drum. Antique columns and capitals were used to support the dome, leading Ernst Herzfeld to suggest that these ancient building materials were spolia from nearby churches, as the medieval Arabic sources indicate that churches commemorating Abraham existed on the citadel prior to the conversion of the space into a Muslim shrine.2
The mosque's prayer hall was once decorated with a marble revetment an inscription band featuring Qur'anic verses inlaid with black material into white alabaster. In addition, the mihrab was constructed out of wooden panels carved with beautiful star-and-polygon patterns, as were the soffits to the windows on the mosque's north side. Herzfeld dated the woodwork and marblework to the reign of Nur al-Din.3 However, Michael Meinicke notes that repairs must have been made to the mosque in the last decade of the thirteenth century following damages to the citadel incurred during the Mongol sacks of Aleppo in 1260-1261/658-659. The marble dadoes and the wooden mihrab, he concludes, could belong to this building phase.4
Notes:
Sources:
Herzfeld, Ernst. Matériaux pour un Corpus inscriptionum arabicarum. Part 2: Syrie du nord. Inscriptions et monuments d’Alep, vol. 1, pt. 1, pp. 119-132. 2 vols. in 3 parts. Cairo: Institut Francais d'archéologie orientale, 1954-1956. 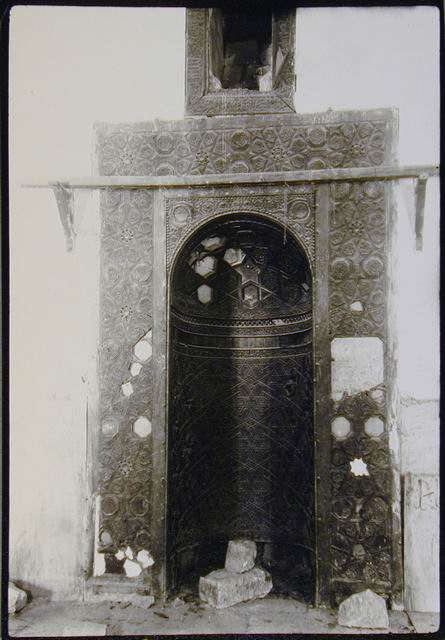