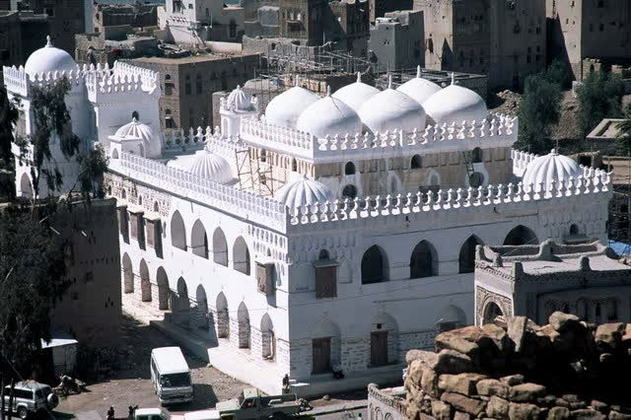 Share
Recipient of the Aga Khan Award for Architecture in 2007.
The Amiriya Madrasa is located to the southeast of the Raa'da Citadel and was commissioned by Sultan Amir ibn 'Abd al-Wahab (Amir II, reg. 1489-1517), the last ruler of the Tahirid dynasty. Its date of completion, Rabi al-Awwal 910 (August-September 1504), is carved in stucco on the east wall of the prayer hall. Zaydi imams, who seized power two decades after the Tahirids, shunned the Shafi'i-Sunni belief of the Tahirids and abandoned the Amiriya Madrasa and its waqf. It has been restored between 1982 and 2004 by the General Organization for Antiquities and Museums with funding from the government of the Netherlands.

The three-story madrasa is placed on the cardinal axis and measures forty meters (north-south) by twenty-three meters (east-west). The ground floor contains a series of shops along the outside and vaulted rooms on the inside, with a public bath (hammam) at the southwest corner. The first floor contains the prayer hall preceded by an inner court to the south, and is accessed with stairs from two porches to the east and south. Its inner court, which is enveloped by an arcade of slender columns, is flanked to the east and west by rectangular madrasa halls that face the street with four mashrabiyya, or timber-screened window boxes. The prayer hall, similarly, is enveloped by vaulted galleries with wide archways pierced into the east, west and south façades of the madrasa. The northern gallery, located behind the qibla wall, is distinguished with carved stucco panels and an octagonal ablution basin. A ribbed dome rises the end of each gallery; the domes to the north, which occupy the corners of the madrasa, are enclosed into rooms with mashrabiyya. Two other ribbed domes mark the southern ends of the madrasa halls. Together, the six ribbed domes sit symmetrically on the flat roof terrace, which is protected all around by a parapet of floral crenellations. The walls of the prayer hall rise three meters above the roof terrace, allowing clerestory windows to bring light to the inside. Its six identical round domes, which are hoisted on tall archways falling on two heavy columns, dominate the madrasa's roofline.

The decorative effort of the madrasa is concentrated on the prayer hall, which is painted entirely with geometric and floral motifs on the interior, above a dado of carved stucco panels. Each of its nine doors (two to the east, west and north galleries and three to the inner court) is topped with a blind multifoliate arch and framed with a carved band of floriated inscription that envelops the interior. The mihrab, centered on the qibla (north) wall, is a semi-circular niche with a multifoliate arch and finely carved stucco frame. The madrasa is built of large baked bricks (12-13 x 9 x 5 inches) on a substructure (ground floor) of local limestone blocks of differing dimensions that are roughly cut and faced on one side.

The walled southern forecourt of the madrasa was excavated during the restoration to uncover the remains of a large shallow pool, privy cells and an ablution area. A second courtyard to the south of the forecourt holds the remains of two other buildings with cells, one of which may have been a baths (hamam). Residences adjoining the mosque, mostly of this century, were partially cleared during the restorations.

During the restoration, the madrasa was rebuilt using limestone, baked brick, and qudad (a traditional waterproofing mortar composed of lime and volcanic aggregate that is polished with a smooth stone and daubed with animal fat). The building was polished, re-plastered and an electrical grid was installed. Carved stucco decorations and tempera wall paintings covering the domes and prayer hall were also repaired. The ground floor has been turned into a museum to commemorate the restoration work. As the first project of its kind in Yemen, it offered local workers the opportunity to revisit and learn traditional building methods. This project has been a labor of love for the eminent Iraqi archaeologist, Dr. Selma al-Radi.