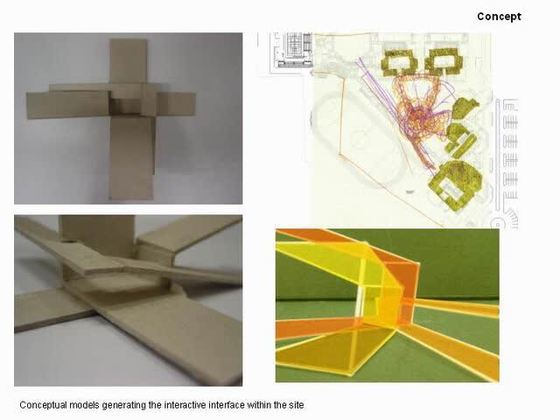 Within the computer clubhouse, spaces are created to promote a community, as they are as open as possible to each other. The building becomes permeable from all sides, it allows for the free movement of people outside it, within it and across it. The building is not felt as an intrusive object within the school but rather a part of the landscape on the pavilion. Children and adults should not consciously feel its presence but rather flow into it without even realizing.

Whether a child is in the building working on a desktop in the computer studio, or drawing a sketch in the courtyard or passing by on the way to class, they should not feel separated from each other but rather doing something together. They should all feel as part of one space, one land, and one entity. The computer clubhouse should absorb people from the community, bring them closer to each other, create a novel social environment, and release them back into the city with a new experience. Every time a child gets absorbed and is released back, the child should feel like he/she has learnt something new, has made new friends, become more confident and inspired to go out and give something back to the community. The computer clubhouse main target the children, the adults of tomorrow should create a sense of responsibility and maturity within them. The computer clubhouse is not a static object placed on the premises of the Aga Khan Academy but rather it is growing out of the ground and going back into it.

The building is part of the landscape, merging into it and out of it. The interchangeable characteristic of the building is felt within its spaces, as a child could be inside the computer studio looking towards the courtyard, then in a second, turn around and become a part of a vast open space. The interactivity is created by the various visual and physical connections between the different spaces within the building whether indoors, or outdoors. A person sitting on the second level above the computer studio could look down at the crafts area, courtyard and out on to the veranda in the lower level and is part of the veranda on the higher level.

Design Decisions
Choice of location: the site chosen for the building was in the central pavilion area rather than the other suggested locations, as the others would cause the
computer clubhouse to align with the rest of the academic buildings. To achieve the concept of the building being part of the landscape and acting as an
interface, the central site seemed to be the most appropriate as it will differentiate it from the rest of the academic or administrative buildings in the
school. In addition, the building will activate the vast open space forming the pavilion that is surrounded by the academic buildings.

Form: To ensure that the building is not perceived as a static object, it was designed with the intent of having small clusters of activities all connected together by the outdoor courtyard between them, a second level that cuts through them as well as stitch them together. The organizational system that consists of four points as shown in the diagram below opened up the possibility of joining them in infinite ways.

The building also needed to be as permeable as possible, hence to allow for this permeability, it does not consist of one mass where all activities are within it; rather it is a group of smaller masses, shaded by an external structure providing a second layer of roofing for the interior spaces and creating outdoor verandahs.

Concept
An interface can be defined as being a common boundary that connects two entities allowing for interaction between the two, adding something different to the two and creating something novel between the two. The concept of the computer clubhouse is that it acts as an interactive, interchangeable interface. It acts as an interface at three different scales, firstly between the community of Mombasa and the Aga Khan Academy, allowing for the community to infiltrate the school and use the computer clubhouse. Secondly, it acts as an interface within the school for the children between the academic restrictive spaces and the liberated type of activities it offers within it. Lastly, there are interfaces within the clubhouse itself, connecting the indoor and outdoor areas, connecting spaces serving different activities.

Vision
After studying, analyzing and understanding the conditions, limitations and the general environment in which the computer clubhouse will be serving, the team believed that the computer clubhouse beside being a place for people of different ages to come and explore their abilities with the computers it also should be a flexible and socialization, interactivity between individual of different ages and backgrounds. The team also believed that the project has a great tendency and a unique chance to integrate between the traditional activities in terms of craftsmanship, fabrication at one hand, and the modern high-tech computer techniques and abilities in other hand. As a vision flexible and formal playground that would integrate tradition and modern under one roof would be the most appropriate vision for such a scheme.

The second part of the concept is to abstract the kids playground structure in terms of series of spaces, and then to roof all the program under a wooden umbrella that would form a double roofing in order to protect the series of indoor spaces environmentally, and than to uniform the computer clubhouse under one uniformed roof in terms of form and hierarchy.

The Design Decisions
The team tried to achieve this concept by using the following strategies:

The indoor spaces were designed to be free, connected, and social interactive spaces.

The outdoor spaces in terms of a courtyard, verandas and a roof garden were designed to act as an interface and integrator; between the indoor and the outdoor environment. The double roof was also developed to provide cool outdoor corridors in which most of the verandas and the outdoor seating areas take place.

Therefore the double roof strategy provides the computer clubhouse with the following:

Provides the indoor spaces for climatic protection.
Provides well conditioned outdoor areas.
Creates a harmonious interfacing layer between the indoor and the outdoor.

The courtyard plays a very important role in terms of the social activities and the indoor - outdoor relationship. Besides being one of the biggest outdoor verandas, the roof garden existing above the workshop space is designed to provide multiple options to people who prefer to stay in outdoor areas with their laptops in a less crowded outdoor area. The computer clubhouse was designed to be different, in terms of form, from the existing academic buildings for the following reasons:

The computer clubhouse enhances the transformation, as an element, between the outdoor areas (amphitheatre, sports field, etc.) and the indoor spaces (classes, offices, etc.) The form is also relating to the different activities taking place in the computer clubhouse and the other different activities surrounding it.The form invites and welcomes people from the northern gate of the campus.

In terms of materials the outer roof was differentiated from the rest of the building by using wood as a different material. Being a sufficient heat insulator, wood was chosen to protect the outer roof and the parts of elevations of the computer clubhouse. This helps the double layering performance to provide the outdoor cool corridors and the thermal insulation between the outer and the inner roof.