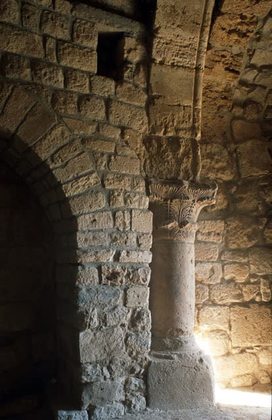 Share
Located at the edge of the Jabal al-Bahra and poised high on a natural limestone foundation, the citadel at Masyaf once protected its neighboring city from the rural hinterland below. While its original construction was erected under Byzantine rule, it is primarily recognized as an Ismaili fortress because the most significant and lasting building efforts date to the rule of the 12th century Ismaili leader Sinan. Representative of this ruler's time spent in the castle is his throne room, which was positioned at the highest central point of the structure. According to local folklore this is the spot from where the Old Man of the Mountain ruled. Salah Ed-din's failed 12th century attempt to overtake the citadel was later achieved in 1270 by Baybars.

Prioritizing defense, this imposing structure is encompassed by an outer curtain wall and towers. Together with two interior strongholds organized around a sizeable gatehouse, these features provided a great deal of security to the settlement below. Also critical for survival were three enormous cisterns cleaved out of the natural limestone rock foundation as they supplied water to the surface through ceramic piping infrastructure. For additional safety measures a network of underground pathways and cavities had been carved out of natural fissures in the stone.

Apart from its commanding presence on the landscape, the most striking feature of the Citadel at Masyaf is its diversity in style and building material throughout the site, indicative of its many generations of inhabitants. Today however, the citadel is structurally compromised, yet current conservation efforts by the Aga Khan Development Network through its Historic Cities Programme (HCP) offer hope for its future. The HCP initiated its work in 2000 and has since restored a damaged part of the exterior wall. In addition they are currently focusing their efforts on a complete restoration strategy for the site that includes reversing structural decline and maintenance.