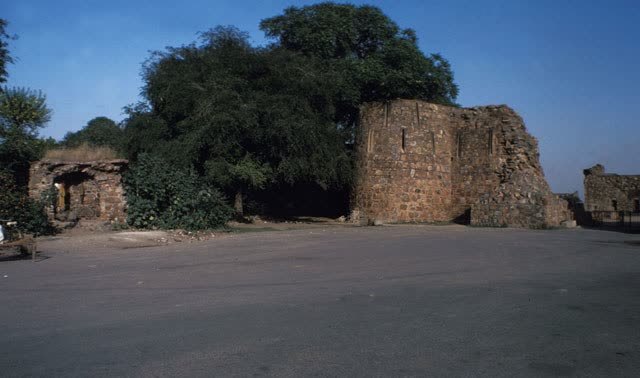 Share
Erected in 1354 by Emperor Firuz Shah III (Tughluq) on the western banks of the Yamuna River in the fifth city of Delhi, Ferozabad, the Kotla of Firuz Shah became a sixteenth-century prototype of Mughal city palace architecture. Conforming to an irregular rectangle plan of 2,624'-6" (800m) x 1,312'(400 m) its longer side follows the north-south axis. The entire formation is encased in high solidly fortified walls composed of stones. Most of the complex's structures are in a state of ruin offering fragmented evidence of the original design.

The central entrance on the west side is a fortified gate with barbican towers on the approach and is protected by a curtain wall with the guard's quarters and soldier's barracks in the inner courtyard. Inside the gate a huge rectangular courtyard surrounded by a pillared verandah, that was the Mahall-i Bari Amm or Palace of the Public Court, was used for public receptions and was also called the Central Quadrangle. Immediately behind this space is a square pillared hall similar to the Diwan-i-Khass, a private hall for the king to receive his counselors and chief administrators.

The private palaces, harems and mosques along the riverbank to the north and south are divided into various rectangular and square courts. In each there were different activities: 'such as pavilions of differing uses, tree-lined gardens with water, baths, fountains, barracks, armories and the servants' quarters, all arranged so as to be connecting.' Descriptive accounts mention mirrored halls, as well as sandalwood sculptures and figural and landscape murals. None of these expressions survived, having all been destroyed in the civil wars following the death of Firuz Shah and the destruction in 1398 wreaked by Timur.

Historian Shams-i Siraj Afif describes the palaces within Kotla: Mahall-i Sahan-i Gilin (Palace of the Clay Quadrangle), also called the Palace of Grapes. It was reserved for receiving princes, governors, officers and men of letters; and the Mahall-i Chhajja-i Chobin (Palace of the Wooden Gallery) was for staff close to the sovereign. The Kushk-i-Feroze was the palace of Firuz Shah Tughluq. The Kushk-i-Shikar was the Hunting Palace. And the Hawa Mahall, or 'palace of the winds' or 'airy palace', was likely where the king's concubines lived.

Little remains of Kushk-i-Shikar, which contains one of the pillars of Ashoka. The Hawa Mahall still stands in the form of a stepped pyramid with diminishing floors, which are linked with private rooms via a secret corridor in the western wall of the jami masjid, now for the most part in ruins. The Hawa Mahall served as a prototype for sixteenth century Mughal city palaces and the narrow connecting corridor behind the qibla wall became a common feature of mosques built later on in the sultanate. The Hawa Mahall is also known as the Lat (pillar) Pyramid because Firuz Shah mounted one of the pillars (lat) of Ashoka atop the palace. The mosque is famous because it is said that Timur who defeated Muhammad Tughluq and sacked Delhi in 1398 offered his Friday prayers here.

The northern part of the Kotla still has a baoli (a deep well surrounded by underground rooms) where the atmosphere is fresh even on the hottest day of summer. Further north in the direction of the mosque is an open L-shaped building that probably was the assembly hall for holding important debates. There are some funerary buildings to the east.