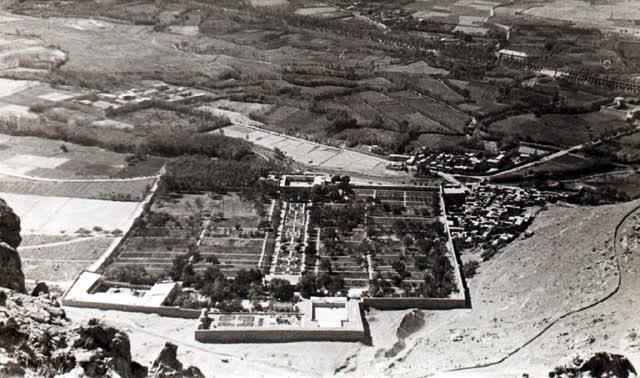 Babur's wish, recorded in his memoirs (Baburnama) was that he be buried in a modest grave open to the sky. This wish was fulfilled circa 1544 when his body was moved from Agra, where he had first been buried, to one of his favourite gardens in Kabul. In around 1607, Jahangir commissioned a headstone for the grave, added inscriptions to the adjoining graves of Babur's son and grandson, and had a marble prayer platform (chabutra) erected nearby. The marble enclosure (jali) around Babur's grave, drawn by Charles Masson in 1832, is thought to have been in place when Shah Jahan visited Kabul in 1639; he has a similar enclosure erected around the grave of his great-aunt Ruqia Sultan Begum at this time. The screen around Babur's grave had collapsed by the time of a surviving photograph by John Burke from 1872. The grave was extensively altered during the early 20th century.

This white marble mosque was commissioned by Shah Jahan I (1628-1657) during his visit to Babur's grave in 1645 (1055 A.H.), and marks his military victory in Balkh, for which gold commemorative coins were also struck.

The marble elements of the mosque remained disassembled, in preparation for restoration, for about three decades before being restored in 1964-66 by the Italian Archaeological Mission led by B. C. Bono. It suffered damage during subsequent fighting and was restored again by the Aga Khan Trust for Culture (AKTC) between 2003 and 2006.

The Garden Pavilion was built in the late nineteenth century by Amir Abdur Rahman Khan (1880-1901), over a Mughal water channel and pool in the center of the garden's central axis. It has a basement with west-facing windows. The first floor, which is enveloped by a wide verandah on all four sides, centers on a large reception hall flanked by two smaller rooms. The hall is adorned with stenciled metal ceilings. The Pavilion was badly damaged in 1992/3 and restored by the Aga Khan Trust for Culture (AKTC) during 2003/4. The trunk of a large plane (chenar) tree stands next to it as a reminder of the scale of the trees that died when irrigation was halted during recent conflicts.

This residential palace was built by Amir Abdur Rahman Khan (1880-1901) in the southeast corner of Bagh-e Babur. It was bequeathed to his third wife Bibi Halima after his death, and is now known as the Queen's Palace.

The main reception rooms of the palace are accessed from an open verandah running around three sides of a central courtyard, which afford fine views of the garden below. Adjoining the perimeter wall of the garden on two sides, the palace has two arched entrances to the north, one of which is designed for carriages. In the southern wing is a small brick-domed bath (hammam), which retains its internal plaster decoration. The main structure was load-bearing mud brick; the pitched roof was supported on a timber structure that included the verandah. 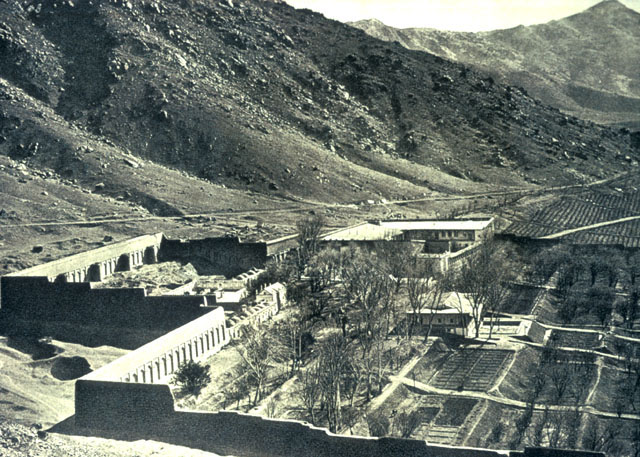