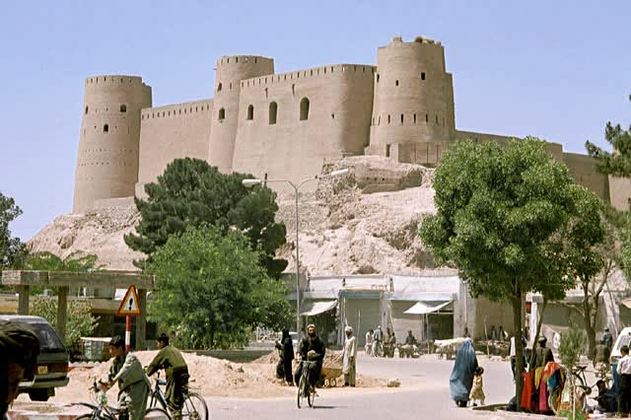 Share
Herat, in the fertile valley of Hari-Rud, was settled as early as the sixth century B.C.E. A mound located to the north of the Old City, known as Kuhandazh (or Kohandez) may have been the site of the fort that Alexander the Great built in 330 B.C.E. following his conquest of the Achaemenid city known as Artacoana or Aria. Herat was ruled by the Seleucids, Parthians, Kushans, Sasanians, Hephthalites, Umayyads, Taherids, Saffarids and Samanids until the tenth century, by which time the square fortified city was already established. Located half a kilometer to the south of Kuhandaz and aligned with the cardinal axes, the walled city described by early Arab geographers had four gates leading into crossing commercial avenues and a square citadel (qal'a) adjoining the northern city wall. This citadel, which has been suggested as another possible site for Alexander's fort, is known today as the Citadel of Herat or Qal'a-ye Ikhtiyar al-Din. Qala Ikhtyaruddin is central to the turbulent history of the city and is an impressive example of surviving citadels (hisar) in the region. Alexander the Great besieged Herat in 330 BC during his campaign against the Achaemenid Persian Empire. Known at the time as Artacoana, Herat was rebuilt and called Alexandria of Aria, and it is believed that a citadel was first established on its current site during this period. Incorporated into the northern perimeter of a square walled city by the Ghaznavids, the Qala stood witness to the changing fortunes of successive empires before being laid waste by Genghis Khan in 1222. Rebuilt by the Kart dynasty in 1245, Herat was again destroyed by Timurlan in 1381. His son Shah Rukh transformed the Ikhtyaruddin Citadel sometime after 1415, when the fortifications were entirely re-built and new buildings were erected inside its walls.
Herat thrived with the Silk Road trade from the Levant to India and China, and became the capital of the Ghurid dynasty in 1175 after a century and a half under the Ghaznavid and Seljuk empires. The city was destroyed entirely in 1221 by the Mongolian army and rebuilt by the Kartid governors who established their rule based in Herat by the mid-thirteenth century. Kartid Amir Fakhr al-Din (reg. 1295-1308) in 1299/1300 reinforced the citadel's towers, walls, ramparts and moat, and added a walled maidan to its west to serve as an open-air mosque (idgah). His successor Ghiyath al-Din (reg. 1308-1329) built two palaces inside the citadel to the east. The name Ikhtiyar al-Din, which refers to both the eastern and western enclosures, is thought to be the name or epithet of a Kartid amir or military commander. Destroyed a second time by Timur's army (1380), Qal'a-ye Ikhtiyar al-Din was rebuilt after Shah Rukh (reg. 1405-1444) moved his capital to Herat and began a building campaign. He reinforced the citadel in stone and fired brick and covered its exterior with glazed tiles. The Citadel was used as a royal residence, treasury, prison and arsenal under the Afghan Kingdom that followed Safavid rule in 1747 and suffered damage in numerous conflicts between the Persian, British, Afghan and Russian forces until the twentieth century. A modern Citadel (Arg-e Herat) was built immediately to its north in the mid-nineteenth century to take over its defensive function.
The Citadel of Herat, which has come to our day in its Timurid form, sits atop a mound at the northern edge of the Old City (Shahr-e Kuhna). It was saved from demolition in the 1950s, and was excavated and restored by UNESCO between 1976 and 1979. It consists of two walled enclosures. The older compound to the east, found filled with debris, was partially excavated to reveal two courtyard structures. It has a roughly rectangular plan measuring about eighteen by forty-two meters, and it is protected with thirteen semi-circular towers, including two flanking a west-facing gate. It is also known as the "Upper Citadel," based on its elevated site, and is built of fired bricks. The Kartid addition to the west, known as the "Lower Citadel," has lower walls of baked brick and includes Timurid period military structures. Its polygonal plan measures about twenty-five by sixty meters with nine circular towers, of which six survive along the south and west walls. The tall Malik Tower on its western wall is thought to be named after a Kartid malik and retains segments of its Timurid glazed tile decoration, including parts of a Kufic inscriptive band.

An Ethnographic Museum, a Military Museum, Handicraft Workshops and an Archaeological Museum were set up inside the Lower Citadel after the 1970's restoration, while the Upper Citadel was opened to visitors as an Open Air Archaeological Museum, with a northern section reconstructed as a traditional residence.Sources: