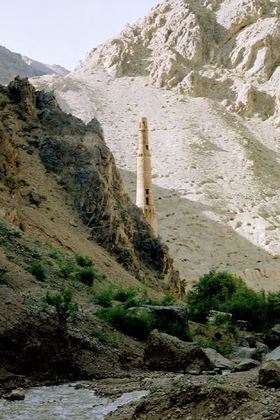 Share
The Minaret of Jam stands sixty-five meters tall in a deep rugged valley at the juncture of the Hari and Jam rivers, approximately one hundred kilometers east of Herat. It was built by Ghurid sultan Ghiyath al-Din Muhammad bin Sam (1163-1203). The foundation plaque above the base on the north side has been read differently by Pinder-Wilson and by Sourdel-Thomine as 1194/95 and 1174/75. The earlier date supports the prevailing argument that the minaret was erected alone to commemorate the Ghurid conquest of Ghazna in 1173. Remains of a settlement on the northern bank of Hari and surrounding hillsides, and pottery fragments collected in the area suggest that the site may be the lost Ghurid capital of Firuzkuh destroyed by Genghis Khan in 1222. Remains of a fort or castle are seen on a hilltop to the east of the minaret.

Made entirely of fired brick, the minaret is composed of a two-tier cylindrical body raised seven meters on an octagonal base. Two spiral staircases, accessed from a single doorway above the ground, provide access to two balconies atop the lower shaft and midway up the upper shaft, visiting six vaulted chambers located in between. Only the supports have remained of the brick balconies. The minaret is capped at sixty-five meters with a cupola (now damaged) raised on six open archways.

The two towers of the minaret shaft differ structurally. The broad lower shaft is made of thick walls enveloping two spiral staircases at center; it rises to a height of thirty-eight meters, with an exterior diameter diminishing from 9.7 meters at the base to 6 meters at top. The narrow upper shaft, by contrast, has a central void spanned by six cross-vaults resting on four internal buttresses. The stairs are here channeled into the narrow spaces between the walls and the buttresses.

The rich decoration of the minaret, executed with tiles and terracotta in high relief, has largely survived and was analyzed in detail by Sourdel-Thomine. The upper shaft features three epigraphic bands -- one below the cupola and two below the second balcony -- that contain the shahada, Quranic verses from Sura al-Saff and the name of Ghiyath al-Din, respectively. The two lower bands are separated by a thick decorative band featuring a symbolic vase motif found in the Ghazna palace of Mas'ud III and on coins issued at Firuzkuh.

The lower shaft is covered entirely with eight vertical tile panels that lead up to a thick epigraphic band below the first balcony. Each panel here features a braid of geometric shapes framed with a continuous kufic inscription (Sura Maryam, Quran 19) and filled in with interlacing geometric patterns. The braid motif on the east and west facing panels, which mark the original entrance and the direction of qibla, are distinguished with the use of eight-pointed stars. The dedicatory inscription above the panels includes the name and celebratory titles of Ghiyath al-Din, written in a floriated kufic script highlighted with turquoise glazed tiles. It is framed with tile bands of varying width, including series of circles and roundels fitted with floral inserts. A cursive inscription, placed halfway up on the eastern panel, gives the name of the architect, 'Ali ibn Ibrahim of Nishapur. Fragments remaining of the fifth epigraphic band on the base of the minaret show that it also contained titles of the Ghurid sultan in a knotted kufic script.

Stabilization efforts for the Jam Minaret began in the 1960s following a survey by the Instituto Italiano per il Media ed Estremo Oriente (ISMEO) that warned of collapse due to soil erosion at the minaret base. A temporary dam was built of stone and wood in 1963-64, and followed by the construction of a gabion wall by UNESCO in 1978. Preservation efforts halted by the civil war were resumed in 1999 and in 2001 with the construction of additional walls and gabions along the Jam and Hari rivers. The minaret and the surrounding archaeological site were amended to the UNESCO list of World Heritage in Danger in 2002. Illegal excavations since 2001 have compromised the historical integrity of the archaeological site.

Knobloch, Edgar. "The Ghorids." In The Architecture and Archaeology of Afghanistan, 330-55. UK: Tempus Publishing, 2002.