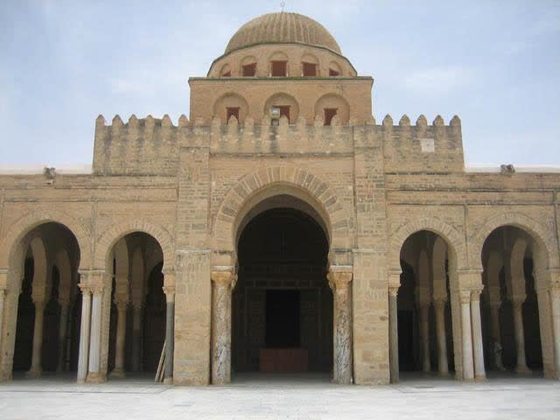 Share
Jami' Uqba Ibn Nafi', or the Great Mosque of Kairouan, is located in the historic walled district of the Medina, between the Rue de la Kasbah and the Rue el Farabi. The mosque, as it stands today, was built by the Aghlabid governor of Kairouan, Ziyadat Allah, between 817 and 838. He erected the building on the site of an older mosque, originally constructed by Uqba ibn Nafi at the time of the 670 AD Arab conquest of Byzantine North Africa. Although the current mosque retains virtually no trace of the original seventh century building, it is still generally referred to as "Mosque of Sidi Uqba," or,"Mosque of Uqba Ibn Nafi." Historically, it has been accorded great significance as the first mosque in the first town of Islam in the West.

The first mosque has been described as a fairly modest building consistent with the new garrisoned town of Kairouan ("camp" in Arabic). The building underwent a number of additions and modifications until it was razed and rebuilt by Hassan Ibn Numan in 703. Between 703 and 816, a number of significant additions were made, including the incorporation of a nearby large courtyard and the construction of a pool now known as the Old Cistern (Al-Majal al-Qadim). The construction of the minaret is also often attributed to this period, although some scholars consider it to be part of the later work of Ziyadat Allah. The next major reconstruction came in 836, when Ziyadat Allah completely rebuilt the sanctuary, including the dome above the mihrab. In 856, Abu Ibrahim Ahmed began the work that would bring the mosque to its twentieth-century configuration, by adding the double-arcaded portico to the sanctuary with a domed entry bay. The portico enveloping the interior of the courtyard is also often assigned to this period; however, some texts cite Ibrahim Ibn Ahmad (874-902) as its builder.

Slightly irregular in shape, the complex measures about 70 by 125 meters and is aligned northwest-southeast. It consists of an arcaded rectangular courtyard with the prayer hall to its southeast, preceded by a seventeen-bay portico. A slightly tapering minaret that is square in plan and three stories high adjoins the northwest wing of the courtyard, slightly off center. The courtyard is entered from six portals, facing northeast and southwest. The prayer hall is entered from the courtyard, as well as from two sheltered doorways from the side. The sanctuary is a hypostyle hall, with arcades emphasized in a T formation characteristic of the region (the "T" is formed by the qibla wall and the longitudinal axis). It is seventeen bays wide and seven bays deep. The roof is flat, with the exception of two domes, one above the mihrab (dating from 836) and one above the entry bay of the portico (reconstructed in the nineteenth century after its 856 form). The two-bay-deep arcade flanking the courtyard is a later addition, and consists of horseshoe arches resting on rectangular pillars fronted by twin columns. Until the end of the nineteenth century, the courtyard was covered with uniform pottery tiles, but today it is paved with white and yellow marble. The complex wall is heavily buttressed on the exterior.

The current mihrab centered on the qibla wall was built by Abu Ibrahim Ahmed. It is said by some scholars that the original mihrab by Uqba Ibn Nafi can be seen through the openwork marble of today's mihrab. It is set in a horseshoe-shaped niche and topped by a semidome of curved wooden planks fixed to a supporting framework. Elaborate floral patterns are painted in a gold pigment against the dark background of the wooden half dome. Twenty-eight white marble panels line the polyhedral interior of the mihrab niche in four horizontal rows. Some of the panels are carved in openwork and others in champlevé: each is unique and is worked in intertwined geometric and floral patterns. The mihrab niche is crowned by a thick horseshoe arch adorned with faience tiles and carried on two columns of red marble with Byzantine capitals. The mihrab niche is framed with marble panels from the Zirid period beneath the level of the capitals and luster faience tiles above that are set in a checkered pattern. The simpler monochromatic tiles are said to be made by a local Mesopotamian artist, while the more complex polychromatic tiles are said to have been imported directly from Mesopotamia.

The minbar also dates from the reign of Abu Ibrahim Ahmed in the ninth century; widely venerated as a masterpiece, it is the oldest dated minbar in the Islamic world. Measuring approximately 3.5 meters in height, it is constructed of precious imported teak in the form of a throne reached by eleven steps. Although its framework was restored in the early twentieth century, its side panels (with the exception of nine) are original, and remain very well preserved.

To the right of the minbar stands a maqsura, a screened section for the ruler, built by the Zirid Emir Muizz ibn Badis in the eleventh century. It covers an area of six by eight meters, and is one of the oldest in the world. The wooden framework of the maqsura is attached to the qibla wall on one side and is tied to the pillars of the arcade with thin bands of iron at the inner corners. It is accessed through a door (Bab al-Imam) on the qibla wall and a set of double doors opening onto the sanctuary. The wooden panels of the maqsura are carved with cubes, beads and reels and show evidence of having been unskillfully restored in the seventeenth century. The delicately chiseled arabesques of the framework have retained their original form. The frieze of the maqsura is adorned with a florid Kufic script that is acknowledged as one of the outstanding epigraphic bands in Islamic art. It is surmounted by a line of pointed and perforated merlons.

As the key monument of the Aghlabid period, the Great Mosque of Kairouan has played a major role in the evolution of North African architecture, serving as the basis for other Tunisian mosques, including the Zaytuna Mosque in Tunis.

Michell, George. 1978. The Architecture of the Islamic World. London: Thames and Hudson, 220.