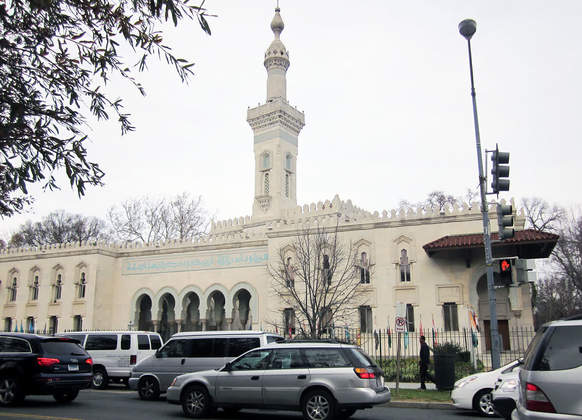 Share
The Islamic Center of Washington DC officially opened in 1957, the first major congregational mosque constructed in America. The Italian architect Mario Rossi, who had built similar buildings in Cairo and Alexandria, Egypt in the 1940s, designed in the building in a "neo-Mamluk" style inspired by the buildings of 15th century Mamluk Egypt. The building is situated in Washington's Embassy Row district. The site was purchased in 1946, the cornerstone was laid on Jan. 11, 1949, and construction completed in 1954.  President Eisenhower dedicated the mosque in a ceremony on June 28, 1957 saying:

"It is a privilege to take part in this ceremony of dedication. Meeting with you now, in front of one of the newest and most beautiful buildings in Washington, it is fitting that we rededicate ourselves to the peaceful progress of all men under one God.
And I should like to assure you, my Islamic friends, that under the American Constitution, under American tradition, and in American hearts, this center, this place of worship, is just as welcome as could be a similar edifice of any other religion. Indeed, America would fight with her whole strength for your right to have here your own church and worship according to your own conscience.
This concept is indeed a part of America, and without that concept we would be something else than what we are.”

The building plan is a three-iwan hall surrounded by an exterior double-riwaq arcade. The arcade is set parallel to the street, but the building is set at an angle to conform to the qibla axis. Traditional Mamluk buildings would have an open courtyard, but due to the climate the central space of the mosque is covered with a clerestory dome. A riwaq of five horseshoe arches serves as the entrance portal, another departure from the traditional Mamluk style.
In addition to the prayer hall, there is a library and multiple classrooms.  The interior furnishings represent a variety of nations and styles. The mihrab is tiled in glazed tiles reminiscent of Ottoman Turkey, the wall tiles were a gift from Turkey, the chandeliers from Egypt, and the carpets from the Shah of Iran.  Outside the flags of the world’s Islamic nations are arrayed around the grounds.
The building is listed, and protected by, the Historic American Buildings Survey.
Sources: