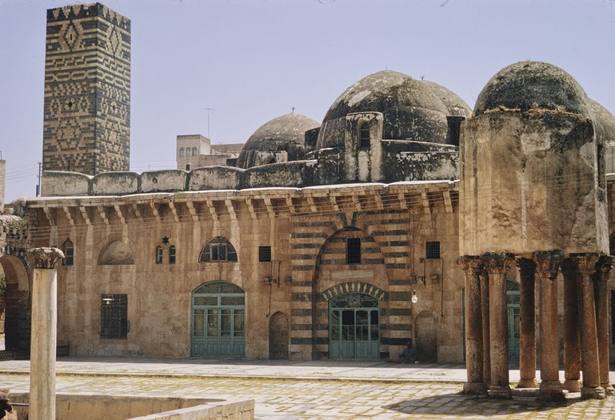 Share
Located in Bab al-Qibli Quarter west of the citadel, the Great Mosque of Hama is one of the city's most ancient standing monuments. The site's occupation dates at least to the third century CE when architectural evidence on the building suggests that a Roman temple was constructed there. During the Byzantine period, this temple was converted into a Christian church and modified accordingly. An inscription dating to 595 CE found on the walls suggests that the conversion from temple to church happened at this time, or that there was at least a major renovation. After the Muslim conquest of Syria, the Byzantine church was converted to a mosque. This conversion occurred in 636-637/15 AH according to literary sources, but it is unclear if any structural changes to the church happened at this time. During the Islamic period, the mosque was renovated a number of times, with a courtyard added early on, and two minarets added later, the first in 1134-1135/529 AH and the second in 1422/825 AH.1 Inscriptions in the prayer hall suggest a renovation took place in 1397-1398/800 AH.2 In 1982, the mosque was destroyed in bombardments to suppress an uprising. Syrian Antiquities Department rebuilt the mosque thereafter according to its historic design.
Before the building's destruction in 1982, the exterior walls of the prayer hall on the building's south end bore ample evidence of the building's pre-Islamic past. The east wall had three infilled doorways as well as fragments of aediculae and cornices. This has been interpreted as the infilled entrance to the original Roman temple, probably dating to the third century CE based on stylistic grounds. The west wall of the prayer hall has another infilled entrance: this time of a large doorway at the center flanked by two smaller doorways toward the sides. These are the remains of the western (main) facade of the Byzantine church that was built into the temple.
The plan:
The mosque comprises a large courtyard enclosed by a vaulted portico adjoined on the south side by a prayer hall and on the west side by several side rooms, including a domed mausoleum. The main entrance is on the north side of the building. It is a simple arched portal that leads through a vaulted passage onto the north side of the courtyard. The courtyard is a rectangular space with its north-south axis being longer than its east-west axis, paved with black and white stones set in geometric patterns. The courtyard includes a square fountain at its center and a domed octagonal treasury elevated on eight classical columns, situated along the west side.
The prayer hall is a rectangular block with an area of 31.45 x 20.90 meters. Two rows of four pillars divide the space into five aisles perpendicular to the qibla, each three bays long, with the aisles furthest to the side being narrower than the three in the center. The courtyard facade of the prayer hall once had five arched entrances corresponding to these five aisles, but today only the central three remain, the two on the sides having been converted to windows. Domes cover the three bays of the central aisle, and the central bays of the aisles adjacent, forming the shape of a cross over the center of the prayer hall.
The southernmost bay on the arcade bordering the west side of the courtyard gives onto a domed mausoleum containing the tombs of two Ayyubid rulers: al-Malik al-Mansur (r. 1244-1284/642-683 AH) and al-Malik al-Muzaffar Mahmud (d. 1299/698 AH). The mausoleum was a square room with a mihrab on its southern wall.
The mosque has two minarets. A square minaret made of black and white stone set into visually striking geometric patterns rises from the southeastern corner of the prayer hall. The second minaret rises from the north wall next to the main entrance, and rests on a square base with an octagonal shaft. An inscription dates it to 1422/825 AH.
Notes:
Sources:
Burns, Ross. Monuments of Syria: An Historical Guide. London; New York: I.B Tauris & Co., 1992.
Creswell, K. A. C. "The Great Mosque of Ḥamā." In Aus der Welt der Islamischen Kunst, edited by Richard Ettinghausen, 48-53. Berlin: Mann Verlag, 1959.
Nilsson, Alexandra. Hama and Jabla: Watercolours 1931-1961 by the Danish Architect Ejnar Fugmann. Aarhus; Oakville, CT: Aarhus University Press. 2002.
Shahāda, Kamāl. "al-Jāmi‘ al-a‘lā al-kabīr fī Ḥamā." Les Annales Archeologiques Arabes Syriennes 26 (1976): 213-222.
O'Kane, Bernard. "The Great Mosque of Hama Redux." In Creswell Photographs Re-examined, edited by Bernard O'Kane, 219-246. Cairo: American University of Cairo Press, 2009.