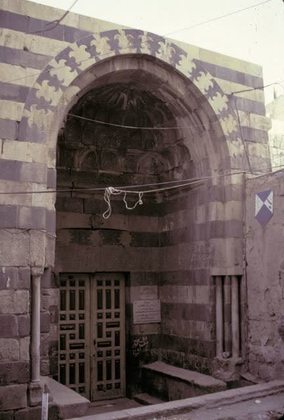 Share
Maristan al-Qaymari is situated along the main street of the Salihiye quarter, to the north of the walled city of Damascus. It was built between 1248 and 1258 by Sayf al-Din Yusef, a member of the Kurdish royal family al-Qaymari who welcomed the Mamluks to Damascus during the Mongol invasion in 1260. Its plan is modeled on the Bimaristan of Nur al-Din, built in 1154 within the city walls.

The building is accessed from the north through a monumental portal, built of alternating courses of black and white stones. The portal arch features interlocking white and black voussoirs with curved profiles, and the portal niche is flanked by two pairs of colonettes.

Inside, the maristan is square in plan. Its central courtyard opens into an iwan to the south and gives access to rectangular rooms to the east and west. The iwan vault features decorative motifs and inscriptions carved into plaster. Two large medallions of floral arabesques are placed on its side walls. An arched mihrab niche adorned with carved plaster occupies its southern wall, along with three windows topped by a colored glass rosette.