Share
Constructed between 1967 and 1969, the Bentota Beach Hotel is one of architect Geoffrey Bawa's most important works. It is an iconic example of Bawa's architectural style during the 1960s, as well as the critical model for hotel design in tropical climates during the decades following its construction. The resort is notable in that it successfully caters to a predominantly foreign clientele, meeting specific expectations in terms of desired services and amenities, while still respecting and representing the local culture in which it is set. The building was commissioned by the Sri Lankan government, which operated many resorts and hotels in the country during that period.

The hotel is located on a unique and picturesque site between two beaches in Bentota, a sixty-kilometer drive south of Colombo, Sri Lanka. The site is to the immediate southwest of a major bridge that crosses the Bentota River as it passes within 200 meters of the Indian Ocean, creating a long and narrow spit of land to the northwest of the site. The Colombo-Galle highway, the road that crosses the Bentota River via the steel-frame bridge, bounds the hotel property along its eastern edge. The western edge of the site is defined by the coastline of the Indian Ocean, and the north by that of the Bentota River. The grounds of the hotel are approximately 370 meters wide east to west and 250 meters long north to south.

The central building of the hotel is located atop an existing sand mound that was previously the site of a colonial Dutch fortification. The building is square in plan at the first level, excepting a trapezoidal extension of the northern gallery beyond the eastern edge of the square. This projection contains service spaces for the adjacent public areas of the resort, out of the way of the principal guest circulation and major ocean views. A simple ring of galleries surround a large open central courtyard, the entirety of which is occupied by a large rectangular reflecting pool. The pool occupies approximately one quarter of the floor area of the first level, and it is located just southeast of the center of the plan in order to increase the relative size of the ocean-facing northern and western galleries. Planters scattered as islands within the central pool provide space for large trees to grow within the courtyard. The leafy canopy of trees shades the central open space and defines the ceiling of this calm interior room.

The ground level of the hotel is contained within a large stone podium built around the original sand mound. The massive stone walls are an architectural nod to the history of Dutch fortification structures on the island, and spaces are carved into the ground behind the walls for shopping arcades as well as pedestrian circulation between the first level and the surrounding grounds. The hotel is entered via a large porte cochère carved into the masonry podium on the eastern side of the building. A large stone staircase leads from this partially enclosed driveway up to the reception lobby, located in the east gallery of the first level.

The Bentota Beach Hotel contains ninety guest rooms. The brief originally called for thirty rooms, which were placed in the L-shaped second and third floors of the central building. Additional guest wings to the north and south of the main structure were added later to increase the capacity of the hotel. These long and narrow two-story wings contain twenty and forty rooms respectively, pinwheeling off of the northeast and southwest corners of the central square as bent single-loaded corridors. All guest rooms face either the Indian Ocean to the west or the Bentota River to the north, assuring all visitors spectacular views from their private balconies.

The site slopes down from the hill anchoring the main hotel building toward the Indian Ocean at the west. The elevational change allows the west side of the first level of the building to form a terrace that overlooks the large pool and outdoor cafe on the ground level. The hotel restaurant is located on the western side of the first level, affording dramatic ocean views to diners.

A variety of natural materials were used in the structure and decoration of the hotel. All of the building materials were locally sourced, as imports were heavily restricted during the years in which the hotel was constructed. The materials selected were intended to age well with time and exposure to the humid tropical climate. Terracotta tiles, dark wood columns and balustrades, unfinished granite bastions, and polished concrete floors form an earthy palette of surfaces within the building. The ceilings of the public spaces are decorated with rich batiks and hand-loomed fabrics in warm colors. Though Bawa hoped that the building would be completely exposed to the elements in the common spaces, the client insisted that the first floor restaurant and lounges be enclosed with glass walls and air-conditioned.

The Bentota Beach Hotel was acquired by the John Keells Hotels Group after the Sri Lankan government sold its portfolio of hotel properties to private firms in the 1980s. A major renovation of the hotel in 1998 included the replacement of the original clay tile roofs with green metal sheeting, the redecoration of the guest rooms and lobbies, and the reconstruction and expansion of the stone podium at the base of the building. While Bawa personally embraced the aging of materials and the development of a patina on buildings over time, the hotel was thoroughly cleaned and all materials were sealed or replaced to make the structure appear perpetually new. Though the renovations were made in hopes of increasing the value and luxury of the hotel as a four-star tourist destination, architectural critics have argued that the changes detract from the success of Bawa's iconic design. Guests to the hotel today continue to admire its tranquil courtyard, dramatic ocean vistas, and well-landscaped grounds.

Genius of the Place: The Buildings and Landscapes of Geoffrey Bawa 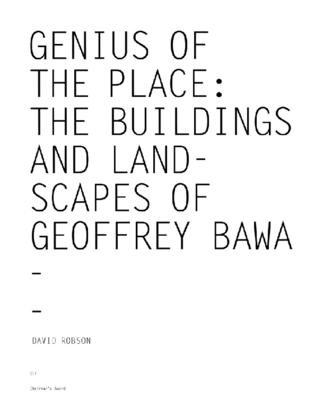 Citation
Robson, David. “Genius of the Place: The Buildings and Landscapes of Geoffrey Bawa.” In Modernity and Community: Architecture in the Islamic World, edited by Philippa Baker, 17-48. London: Thames & Hudson, 2001.
Description
Geoffrey Bawa is Sri Lanka's most prolific and influential architect. His work has had tremendous impact upon architecture throughout Asia and is unanimously acclaimed by connoisseurs of architecture worldwide. Highly personal in his approach, evoking the pleasures of the senses that go hand in hand with the climate, landscape, and culture of ancient Ceylon, Bawa brings together an appreciation of the Western humanist tradition in architecture with needs and lifestyles of his own country. Although Bawa came to practice at the age of 38, his buildings over the last 25 or more years are widely acclaimed in Sri Lanka. The intense devotion he brings to composing his architecture in an intimate relationship with nature is witnessed by his attention to landscape and vegetation, the crucial setting for his architecture. His sensitivity to environment is reflected in his careful attention to the sequencing of space, the creation of vistas, courtyards, and walkways, the use of materials and treatment of details.