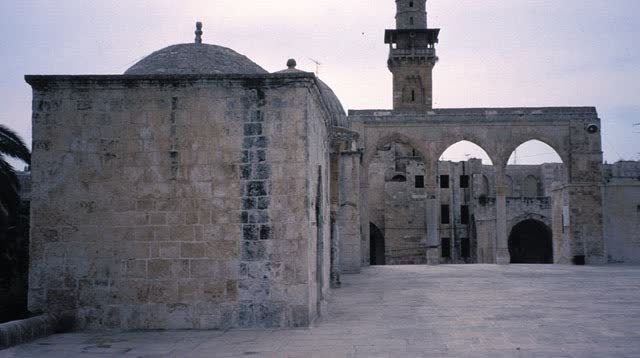 Share
Located at the southwest corner of the Dome of the Rock in the old city of Jerusalem, the Qubba Nahawiyya (or Madrasa al-Nahawiyya) is composed of two interdependent stories, one at the level of the Dome of the Rock platform (sahn, or courtyard), and the other at the lower level of the al-Haram’s esplanade. In his book Mufarrij al-Kurub fi Akhbar Bani Ayyub, Ibn Wasil writes that al-Malik al-Mu’azzam 'Isa built the Qubba as a great waqf for the teaching of the seven readings (versions of the Qur’an), and appointed the Shaykh Shams al-Din b. Razin al-Ba’albaki for this purpose, particularly for the teaching of Arabic grammar ("nahw"). The thirteenth-century historian Ahmad Ibn Yahya al-Umari designates 1211/608 as the year when al-Malik al-Mu'azzam 'Isa endowed the Qubba, whereas the fifteenth-century historian Mujir al-Din al-Ulaymi gives the year 1207/604 for its completion. According to al-Umari, this building known as the Madrasa Mu'azamiyya was also known as the Qubbat al-Nahw ("Dome of Grammar").

The Ayyubids resumed the early Islamic tradition of erecting freestanding domes (qubbas) on the site of the al-Haram in order to commemorate religious events (e.g., the Qubbat Yusuf, built by Saladdin al-Ayyubi on the southern side of the Dome of the Rock platform). Later, the qubba emerged as a pedagogical institution for the teaching of theology and philology. The Qubba Nahawiyya is such an institution.

In its current state, the Nahawiyya shows major alterations in terms of building materials, added and omitted structures, and openings, particularly on its northern elevation. Most architectural historians identify three phases in which the building changed its appearance. The original building, or the first phase, comprised a central open portico (riwaq) with three arched bays on the north elevation, flanked by two domed chambers (4 by 4 meters each) on the east and west, projecting 1.8 meters forward from the portico’s elevation surface. This description aligns with what Al-Umari describes; he also mentions that the eastern chamber served as the residence of the imam, the attendant of the Qubba, and for storage for oil used to light the al-Haram platform. Traces of the portico’s arches can still be seen on the elevation, which was filled with stones in a second phase. An inscription and grooves on the floor indicate the introduction of a sabil (water fountain) in 1137/1724-25, the Ottoman period. This sabil, located on the western corner of the portico and the west chamber, is no longer extant.. The original eastern dome most likely collapsed as a result of an earthquake and was replaced by a shallow dome similar to other Ottoman domes built in Jerusalem.

The most distinctive feature of the third phase is the lavishly ornamented portal situated at the center of the north elevation. According to photographs, this portal was added sometime between 1865 and 1889 (it appears in an 1889 photo by the American Colony in Jerusalem but is missing from an 1865 photograph taken by Sir Charles Wilson). This intricacy of detail present in this main portal contrasts with the simplicity of the white limestone used to as infill within the three archways of the portico. It is as tall as the upper story of the Qubba and is elevated on a plinth, on top of which rest two pedestals, one on either side of the portal, holding a column of a rope-like intertwined shaft. On top of the shaft rest two capitals carved with a leaf motif, similarly to the capitals of the Hagia Sophia in Constantinople. These capitals carry a rectangular frieze supporting two carved panels that hold another horizontal entablature, at the same level as and jutting from the Qubba’s roof.

From this main portal one enters the vaulted hall (12.86 by 4 meters), comprising three cross-vaulted bays which correspond to the three bays of the portico and ascend from massive rectangular piers on the north and south walls (four on each wall). To the west of this hall is the domed chamber (4 by 4 meters), accessed through a door. Four squinches facilitate the transition from a square to an octagonal zone, above which eight more small conch-like squinches on the four corners of the chamber create a sixteen-sided drum that is closer to a circle upon which drum of the dome rests. The dome is constructed of horizontal circular tiers of stones and has an external cylindrical drum, on top of which rest brackets that hold the cavetto cornice. These bracketed cornices are similar to those used in the dome of the Holy Sepulchre and the Church of St. Mary (Gethesemane), and they continued to be used in the early Mamluk period. The stones of the dome are covered by sheets of lead and surmounted by a stone finial.

The north elevation of the western chamber has three windows, now blocked. The window in the middle (1.2 meters high and 0.9 meters wide) is higher than the other two flanking it (0.8 meters high and 0.6 meters wide). All three lintels of these windows are cut diagonally, beveled back into the wall, and carved with geometric rope and fish-scale motifs. The same window treatment appears on the west and south walls of the dome chamber: three windows, one higher than the other two, with geometric carvings.

The Qubba sits at the southwest corner bordering between the upper platform of the Dome of the Rock and the lower esplanade. Its south and west elevations are two stories constructed in smooth white stone. The lower story of the south elevation comprises four pointed archways: one is on the western bay underneath the western dome, while the other three correspond to the three bays of the upper hall area. These archways were previously blocked by masonry, which was removed in 1982-83 in a restoration project carried out by the administration of the Awqaf of Jerusalem. These archways are supported on two sides by buttresses (60 centimeters wide and 3.65 meters high) made of stone and protruding from the elevation. On the upper story, in the three bays of the southern wall of the hall, are three tall windows with cusped arches, at the center of each bay. The east elevation is of one story overlooking the al-Haram platform. Constructed of the same white limestone used on the northern elevation, it is a contemporary structure. It has no openings.

The eastern domed chamber was accessed through a small door located on the northeast corner of the wall separating it from the main hall. This wall has been removed, and in their place, two pointed arches springing from a round column in the center of the opening were installed. The western elevation has the same pointed archway at the lower story, bolstered by similar buttresses projecting from the wall. On the upper floor, as mentioned above, the triple window motif appears. Under the stair flight leading to the upper level of the Dome of the Rock through the southwest colonnade is a small door that gives access to this lower story of the Qubba.

The lower level was originally accessed from the four pointed arches on the south elevation on the esplanade’s level. Today, a door underneath the stairs ascending to al-Haram gives access to the lower floor of the madrasa. After turning at a right angle, one enters what used to be a hall with eight cross vaults springing from eight massive piers and defining eight square bays. Recently, the space was partitioned by the Awqaf administration into cells in order to accommodate offices.

Over the course of the twentieth century, the Qubba had several different functions. Between 1923 and 1956 it was a library known as Dar Kutub al-Masjid al-Aqsa, after which it housed the headquarters of the committee responsible for the restoration of the al-Aqsa. Currently, it is the office of the Head of the Supreme Muslim Council.

Burgoyne, Michael Hamilton. 1987. Mamluk Jerusalem, An Architectural Study. London: Published on behalf of the British School of Archaeology in Jerusalem by the World of Islam Festival Trust, 91, 570.