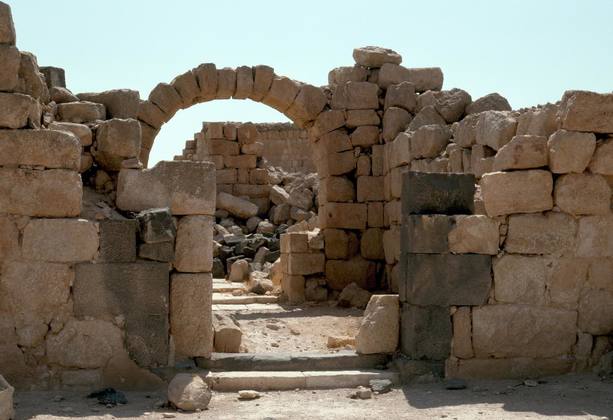 Share
The complex of Qasr al-Hallabat is located in Jordan's eastern desert. Originally a Roman fortress constructed under Emperor Caracalla to protect its inhabitants from Bedouin tribes, this site dates to the second and third century AD, although there is trace evidence of Nabatean presence at the site. It was one fort of many on the Roman highway, Via Nova Traiana, a route that connected Damascus to Aqaba by way of Petra and Amman. However, by the eighth century, the Umayyad caliph Hisham ordered for the Roman structures to be demolished in order to redevelop this military site and its neighboring territory to become one of the grandest of all Umayyad desert complexes.

Guided by the extant plan, he incorporated a mosque (found 15 meters from the southeast of the main structure), a complicated water system including five cisterns and a considerably large water reservoir, and a bathhouse. Furthermore, situated to the west of the palace remains an enclosed structure probably used for agricultural purposes such as cultivating olive trees and/or grapevines. While only one-layered stone footprint of the agricultural structure still stands today, three wall sections of the mosque, including the mihrab in the southern wall, remain in tact. The main palace is constructed of black basalt and limestone and has a square floorplan with towers at each corner. Grand in stature, the principal structures were further enhanced with decorative mosaics depicting an assortment of animals, detailed frescoes and highly crafted stucco carvings. The site remains to be completely restored.

Approximately 1400 meters east of the palace stands the remains of the mosque at Qusayr al-Hallabat. Small in scale, it measures 10.70 by 11.80 meters and is constructed of layered limestone. Inside, two arching riwaqs divide the mosque into three sections. A rounded molding extends the perimeter of the space at the height of 2.10 meters. Similar to Qusayr 'Amra and Hammam as-Sarakh, three tunnel vaults support the roof of the structure. Encircling the mosque from the north, west, and east stood a 3.30-meter wide portico.

The bath located approximately two kilometers east of the main site is known as Hammam as-Sarakh and consists of a rectangular audience hall, and a bath. It is reminiscent of Qusayr 'Amra in plan. It is speculated that the main entrance to the hall was centered in the southwestern façade, however today this section of the bathhouse barely stands, encompassed in rubble. Like the audience hall at Qusayr 'Amra, an alcove off the south-east wall leads into two small side rooms each one incorporating three narrow windows. The bath area can be entered through a doorway at the northern corner of the hall. This leads first into the apodyterium (changing room) through which to the right one can enter the tepidarium (heated room). Directly across from this entrance another passageway leads to a small bay. The caldarium is accessed off the northeast side of the tepidarium and includes two semicircular niches, each featuring a central window that flanks the main domed area. The dome itself was lacquered with rose-colored cement on its exterior with shale-covered supports on its interior. In addition, it was punctuated with eight round apertures of which remnants can still be detected. Once decorated in marble, mosaics, and frescoes, these attributes of Hammam as-Sarakh are today in the process of being restored.