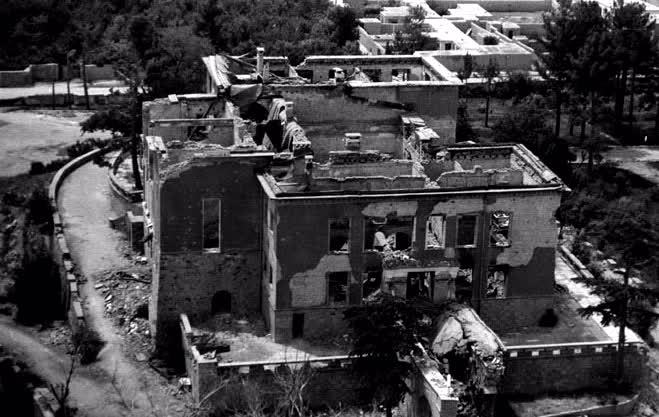 Chihilsitoon Garden and Palace is a 12.5-hectare public site, located four kilometres south of Babur’s Garden, on the same range of foothills of the Sher Darwaza Mountain. Historic documents are believed to refer to this area as early as the sixteenth century, describing an outpost where Mughal troops were stationed in orchard gardens below a hillside settlement along the Kabul River.

A panoramic sketch produced in 1876 by a British military cartographer shows a hillside residential cluster in the same area, surrounded by large trees, possibly indicating a formal garden on the site. Historic maps from the same period refer to the settlement as “Hendaky”, which was also the name of the small pavilion built on a stone outcrop above the garden by Amir Abdur Rahman Khan (r. 1880–1901) for his son Habibullah at the end of the nineteenth century. With a royal pavilion on the site, it is believed that this was the time that the garden was delineated and a wall constructed at its perimeter. Early twentieth-century photographs of the pavilion show an elongated rectilinear building (with one circular end) surrounded by a deep arched veranda with forty columns (chihil-sitoon) built above a series of terraced
platforms with views onto the Chardeh plain. With newly built royal residences (arg) at the centre of the city, the pavilion remained unoccupied and occasionally served as a state guesthouse. The most prominent visitors who stayed in the building were members of the British Boundary Commission (charged with negotiating the northern boundaries of Afghanistan).
Upon his ascension to the throne in 1904, Amir Habibullah Khan (r. 1901–19) expanded the site, establishing at its centre a formal axial garden with marble fountains and paved walkways. As part of this work, the pavilion was expanded into a two-storey double-height rectilinear building, retaining only twelve of the original forty columns of its covered veranda and, ironically, renamed it the Chihilsitoon Palace. The flat roof of the original pavilion was replaced by a system of pitched roofs, and the shallow, fan-shaped flights of steps gave way to heavy lateral staircases with castiron railings.
The palace was damaged during the armed conflict that led to the succession of Nadir Khan (r. 1929–33), but later repaired and reused as a summer palace and state guesthouse. The building was once again transformed during the reign of King Mohammad Zahir Shah (r. 1933–73) when two squat towers were added and the external facades of the building were modernized. Used at that time primarily as a state guesthouse, dignitaries who resided within the Chihilsitoon Palace included heads of state, most notably US President Dwight D. Eisenhower (1959) and Soviet Premier
Nikita Khrushchev (1955, 1960).
By the 1960s and 1970s, due to the increasing importance of the building as a place of accommodation for foreign diplomats, the government further invested in adding spaces for receptions, banquets and state dinners. A modern L-shaped building was constructed to the east of the palace, which provided additional space for accommodation and banqueting services. The Chihilsitoon Palace remained a hub for government activity in the 1980s, mainly used to convene press conferences with local and foreign media. During the initial days of the Soviet occupation in 1979–80, President Babrak Karmal reportedly took refuge in the Chihilsitoon Palace and was guarded by tanks and anti-aircraft guns. During the conflict that ensued, the building was targeted and heavily damaged. The site remained unused in the years that followed, and was further destroyed and looted during the conflict in Kabul in the early 1990s.
Source: Aga Khan Trust for Culture