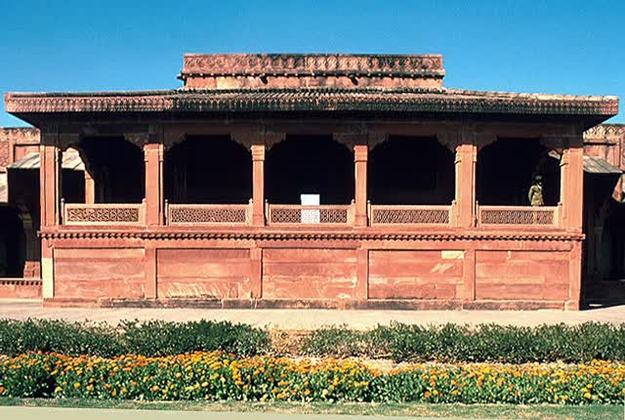 Share
The public audience hall (Diwan-i 'Amm) was the space appointed for various purposes of public nature, including the first daily public appearance of the Emperor, approximately three hours after sunrise. The Diwan-i 'Amm was also the site of court ceremonies, the reception of guests, and the administration of justice, as well as major festivals (i.e., Nawruz) and celebrations of military victories. In 1584, the wedding ceremony of Akbar’s son took place in the Diwan-i 'Amm. Until 1582, when Akbar abolished public prayers, the Diwan-i 'Amm was used extensively as a prayer space. To this end, it contained a westward-oriented qibla. Also located along the west of the Diwan-i 'Am was a royal pavilion where Akbar would sit, facing the worshippers.

The Diwan-i 'Amm was recorded to be in use by 1573 and is assumed to be one of the first structures completed on the site. An oblong complex comprising a large quadrangular space, 112.38 meters north-south and 55.20 meters east-west, it is wrapped by a colonnaded passageway (dalan) composed of one hundred and eleven bays. The dalan is interrupted only by the Emperor’s pavilion, in the middle of its western side. Apart from the entrance on the east that leads to the Agra Gate, there are two other accesses to the enclosure. The entrance on the south side connects the Diwan-i 'Amm with the State Archive (Daftar Khana), and the entrance on the northwest angle leads to the road from the villages of Sikri and Nagar.

On the west side is an exit leading to the semi-public spaces of the imperial complex, specifically to the Private Audience Hall (Diwan-i Khass). A colonnade, now partially destroyed, linked the Diwan-i 'Amm to the Diwan-i-Khass in such a way that Akbar could pass from one building to another. The entry and exit points are asymmetrically positioned with regard to the primary axes of the enclosure. The dalans, constructed from red sandstone, are set on a raised plinth and are composed of square stone columns with plain bases and slightly molded capitals. These are surmounted by simple brackets supporting stone lintels and a continuous eave (chhajja). From the exterior of the quadrangle, the dalans are enclosed by a rubble wall coated with cement. The parapets over the dalans, which is decorated on the exterior with a continuous carved frieze, are quite high (one source estimates that they are 1.82 meters tall) enabling the roofs to be used as a private walkway by the royal women. The roof was accessed by a staircase found along the south end of the quadrangle opposite from the Hujra Anup Talao (pavilion). This staircase terminates in a chamber built over the center of the left dalan of the west side. The walls of the chamber are coated with cement. There are two openings on its east side, overlooking the courtyard, with two balconies slightly projecting into the quadrangle.

The Emperor’s pavilion is a small rectangular structure of red sandstone, measuring 9.27 by 6.65 meters, positioned symmetrically to the enclosure and projecting slightly into the courtyard. It faces east towards the Diwan-i 'Amm and is raised at least 2 meters above from the courtyard level, an arrangement that blocks direct access. In plan, it is a single chamber with stone walls 1.10 meters thick surrounded by a portico, 3.05 meters wide. The flat-roofed chamber itself rises above the porticos. In the center of each side of the chamber is an opening. The opening on the west constituted the exclusive royal access to the Daulat Khana courtyard and Akbar’s private quarters. The eastern portico is a five-bay columned structure protected by a low stone jaali balustrade. The portico is shaded by a stone-tile roof (khaprel) resting upon carved brackets, above which runs the same carved parapet as the one over the dalans. The eastern portico is divided by two exquisitely carved three-part trapezium screens, with the Emperor’s seat in the center. There is no access from the Emperor’s seat to the porticos on the south and north sides, except via the chamber itself. The western portico only differs from the eastern in that it lacks the jaali-work balustrades. A flight of stairs leads from its central bay to the Daulat Khana courtyard.

It is evident that the Emperor’s pavilion was constructed prior to the dalans: on the north and south sides of the pavilion, the dalans overlap with the pavilion’s chajja. The grass presently visible in the central court is a nineteenth-century British addition; the original courtyard was paved, in keeping with its multifunctional nature.