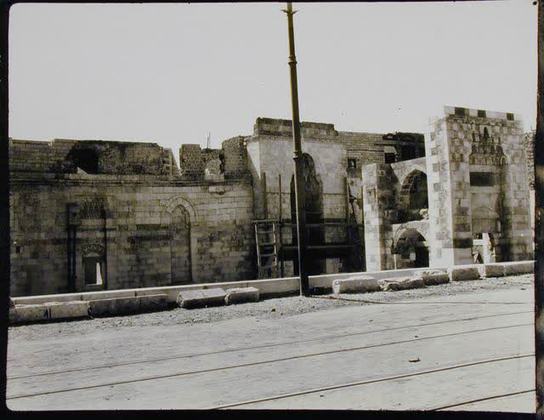 Share
The mausoleum, prayer hall, and portal of the Zawiya of Shaykh Zayn al-Din Yusuf, who introduced the 'Adawiyya Sufi order into Egypt, were built in 1298 by his followers after his death. It is a rare example of a unit endowed by a patron who was not a member of the ruling class. He was the chief qadi, or judge, under Sultan Qalawun.

The building was adapted to a cruciform plan probably in 1325, to accommodate the functions of the zawiya. The freestanding portal was added in 1335-6. The inscription is the only extant relic from the Bahri Mamluk period to use the term zawiya. The mihrab of the qibla iwan, which gives the genealogy of Shaykh Zayn al-Din back to the Umayyad caliphs and the Quraysh tribe to which the Prophet Mohammad belonged, is a rare example of a Cairene mihrab bearing a non-Qur'anic inscription. There are only two others bearing such inscriptions - the flat mihrabs of al-Afdal Shahinshah and Sultan Lajin in the Mosque of Ibn Tulun.

The mausoleum is covered by a brick dome whose exterior displays convex ribbing. The inside of this dome has alternating concave and flat ribs, the latter carved with bands of ornament. At the base of the dome each of these flat ribs springs from a niche flanked by engaged colonnettes and surmounted by a fluted shell. These ribs converge in an inscription medallion at the apex of the dome.