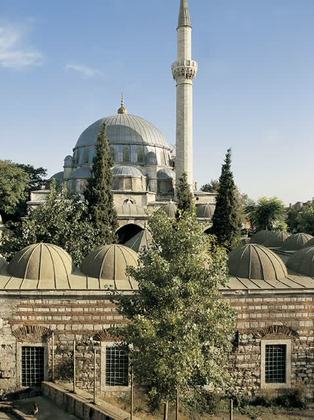 Share
According to the inscription above the portal, the complex was commissioned by Nisanci ("marksman") Mehmet Pasa (d.1592). Although the complex is widely accepted as a Sinan monument, its name doesn't appear in Sinan's Book of Buildings (Tezkiret-ül Bünyan). Given that Sinan died in 1588, the complex, whose construction began in 1584 and ended in 1589, could have been completed by one of his former assistants, the architect Davut.

Originally built as a madrasa and a dervish lodge (tekke), the complex today comprises only a mosque with a fountain courtyard and a tomb. The mosque, a stepped structure developed from a simple square plan, is located on the southeast of the complex. A five-bay portico, facing the fountain courtyard, is attached to the northwest side of the mosque. This courtyard, with approximate dimensions of thirty-two by thirty-five meters, is located northwest of the mosque and is surrounded on three sides by a twenty-bay portico. The tomb is attached to the east corner of this courtyard.

To the northeast is a secondary courtyard wall, which turns and extends to the east corner of the mosque. This wall, together with the cemetery, encircles the tomb and forms the street edge. The complex is entered from two opposing doors; the northeastern door, located in the middle of the tomb courtyard wall, leads to the door of the fountain courtyard that falls west of the tomb. The southwestern door, facing the street, leads directly into the fountain courtyard.

Entering the fountain courtyard, one stands before the five-bay portico of the mosque, which is roofed by four domes on its side bays and a mirror vault in the central bay. The dodecagonal fountain of the complex is placed northwest of the central bay, strengthening the qibla axis. The central bay of the portico is elevated, indicating the portal into the prayer hall. This portal contains has a shallow muqarnas carving and an inscription.

Entering from this portal, the visitor has a sensation of spaciousness, an impression that contrasts with the actual dimensions of the prayer hall. This feeling is created by the unique structural and spatial configuration of the Nisanci Mehmet Pasa Mosque, where Sinan brought elements of earlier design experiments together. A dome fourteen meters in diameter, flanked by four larger and four smaller half-domes on the sides, surmounts the central space. The load from the upper structure is distributed through the octagonal drum to eight columns embedded in the walls of the prayer hall, enhancing the unity of the interior space.

The prayer hall extends to the projected iwans found between the paired columns, creating a gradual enlargement of the interior. The marble mihrab is located in the southeastern iwan projection. The stepped character of the interior space is visible on the qibla exterior elevation, while two rectangular rooms fill the corners of the prayer hall on the entrance elevation. Topped by mirror vaults and used as guest rooms, these rooms are directly accessed from the prayer hall. On the opposite side, the stairs embedded on the two sides of the qibla wall lead to the upper speech platforms. The upper galleries are found along the three walls of the prayer hall, leaving the qibla wall blank.

The mosque is made of cut stone, and the portico is a composite stone and brick structure. The Nisanci Mehmet Pasa is mostly unadorned, excepting the modest painted ornamentation within the prayer hall.

The tomb is an octagonal structure surmounted by a dome. It is entered though the portal on the northeast, where a three-bay portico is attached to the elevation. The portico is surmounted by an eave and is carried over four columns. Under the portico, the sides of the entrance are ornamented with mihrab niches. All sides of the tomb, except that facing west, which is embedded in the arcade of the northeastern entrance of the fountain courtyard, feature a casement window with an arched window above it.

According to records, the complex was damaged in the 1766 earthquake. The inscriptions near the portal niche describe a restoration in the period of Mustafa III (1757-1774). A later restoration of the madrasa was undertaken in 1835, in the time of Mahmud II (1808-1839). The most recent restoration dates to 1958, and was undertaken by the General Directorate of Religious Endowments. 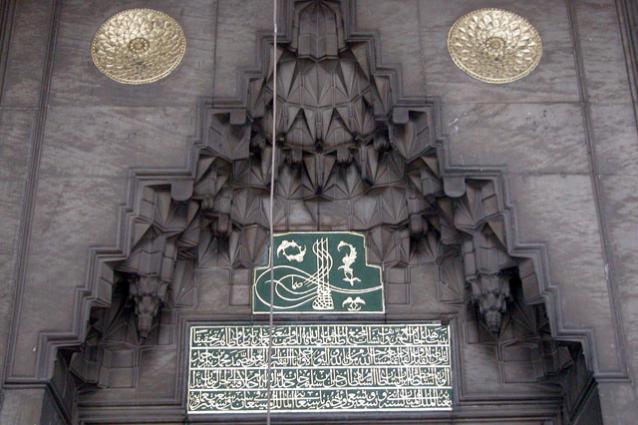