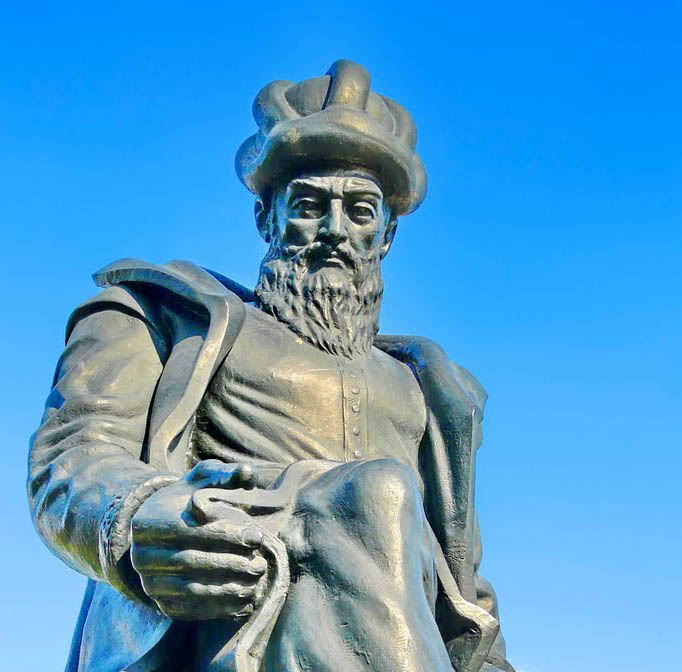 Sinan (also known as Koca Sinan, Sinan Abdulmemnan, and ) is arguably the most celebrated architect of the pre-modern Islamic world, and certainly the figure who remains best documented today. As chief architect of the Ottoman Empire at its height between 1538 CE (AH 945) and his death in 1588 CE (AH 996), Sinan oversaw the design and construction of at least 476 buildings, 196 of which survived until the twenty-first century. Sinan was able to produce an impressive body of work unparalleled among Islamic architects due not only to his position of authority within the Ottoman administration but also to his unusually long life. Sinan’' work evolved through his long career as he developed unique proportional systems of structuring space; he is best known for the design of several large, spatially innovative domed mosque complexes. A renowned cultural figure in his own time, Sinan commissioned three autobiographies before his death which provide contemporary historians with many factual details about his life and works, though their tone does tend toward the fantastic. Sinan was a master of Ottoman architecture who recomposed traditional Islamic building elements through new spatial logics, and his work continues to influence many contemporary architects who have interpreted his experiments with proportion and structure as precursors to the modernism of structural rationalism.

The details of Sinan's early life are not well documented, but he likely was born in 1490 CE (AH 895) to a Greek Christian family in the village of Kayseri in central Anatolia. He converted to Islam and was recruited into military service as a janissary at the age of twenty-one during the reign of Sultan Selim I (reg. 1512-1520 CE / AH 918-926). During his time in service, he was trained as an engineer in the construction of military architecture, including citadels, bridges, and the conversion of churches into mosques. Over a decade of travels afforded him broad experience in structural design and exposure to many regional styles of architecture within the empire.

The sultan became aware of Sinan’s architectural work in the 1530s during his military career and named him chief court architect in 1538 CE (AH 945), following the death of predecessor Ali Acemi. As court architect, Sinan technically oversaw the construction of all public works within the Ottoman empire, though his personal involvement in projects was typically limited to those in Anatolia, especially those in his adopted home city of Istanbul. Sinan’s differential investment in building commissions due to the practicalities of distance allowed regional techniques of construction to persist within the designs of many buildings that are attributed to Sinan but were likely only loosely planned by him; one notable example of this is the Süleymaniyya complex in Damascus (1552-1559 CE / AH 959-966), which features a type of stonemasonry particular to its locale and completely distinct from that of Sinan’s works in Istanbul.

Sinan retained the post of chief court architect for fifty years until his death in 1588 CE (AH 996), designing a wide variety of structures for the sultan and other imperial patrons. His works include mosques, palaces, baths, schools, hospitals, mausolea, fountains, aqueducts, inns, and bridges, among other structures.

Sinan’s first major commission as court architect was the Aksaray mosque complex, constructed in the early 1540s. The single-domed mosque is typical of Sinan’s first stylistic period, when his designs largely aligned with the legacy of his predecessors within Ottoman architecture. His most well-known work from the early years of his careers is the Sehzade Mehmed Mosque in Istanbul (1548 CE / AH 955), commissioned by Süleyman after the death of his son in 1543 CE (AH 950). Its plan features a large central dome, surrounded and buttressed by four half-domes. One of the three largest mosque complexes that Sinan designed, the Sehzade was in many ways similar to the earlier Sultan Bayezid II mosque (1501-1505 CE / AH 906-911), also located in Istanbul. However, Sinan arranged the buttressing domes of the Sehzade mosque as to create a more gradually sloping exterior roofline than that of the Bayezid mosque, and to allow for greater perforation within the lower portion of the central dome. Both of these innovations within the roof zone would be further developed in Sinan’s later architectural projects.

Following his military career, Sinan’s work quickly evolved to challenge the established norms in a second stylistic period, which is considered to span from the mid-1550s to 1570. During those years, Sinan experimented with novel methods of siting buildings and the structural expression of multi-domed mosque roofs rising from rectangular or octagonal bases. Evidence of such mature formal investigations may be found in one of Sinan’s most famous works, the Süleymaniye complex (1550-57 CE / AH 957-964). There Sinan used a complex series of stone foundation walls to address a sloped site overlooking the Bosphorus in Istanbul. The complex is terraced across three major ground levels, with various supporting programs placed above and below the mosque on the sloping ground. Like many of the imperial mosques in Istanbul designed by Sinan and others, the Süleymaniye mosque was the centerpiece of a larger complex known as a külliye, which included spaces for worship and religious study in addition to community-serving and even commercial programs. The arrangement of the buildings according to three different axes and ground planes creates a spatial hierarchy that exploits the irregular site and skillfully transforms the potentially problematic incline into a meaningful highlight of the overall complex design. The large complex was the most ambitious religious center constructed by the Ottoman empire, comprising fourteen distinct buildings around the mosque and its sloping gardens. Though the mosque has some similarities in form and scale with the nearby Byzantine Hagia Sophia, its interior is intentionally much more unified than the partitioned space of the famous church, and its exteriors more richly appointed. The roof of the Süleymaniye does borrow from the Hagia Sophia in its arrangement of supporting domes, as a central dome is buttressed by two half-domes on the north and south, creating a longitudinal axis through the building. The impressive dome is perforated with a ring of windows between buttresses at its base, and it rises to a height of fifty-three meters from a base twenty-seven meters in diameter.

Though Sinan is best known for his exploration of the mosque typology, he was a capable designer of many types of structures, including those with secular civic programs. One of Sinan’s notable infrastructural projects is the aqueduct at Maghlova (1553-64 / AH 950-971). Spanning the Alibey River near Istanbul, the portion of the aqueduct above water level is divided into two tiers, structured by a series of laterally buttressed masonry arches at multiple scales. The sharp lozenge forms of the buttresses recall formal techniques traditionally employed in the support of Ottoman domes, while the clean and minimalistic articulation of the aqueduct renders it strikingly modern in its correspondence of form and structural function.

In contrast, Sinan's Rüstem Pasha Mosque in Istanbul (1562-1563 CE / AH 969-970) is famed for precisely what the aqueduct at Maghlova lacks: intricate ornamental treatments. The mosque's interior is sumptuously surfaced in detailed Iznik tilework. Though the tilework is a noteworthy example of this type of rich surface ornamentation, the fine scale of its decorative patterns ultimately distracts attention from the solidity of the structural piers that it wraps, making the mosque’s interior structure appear far less clear than the reality of its simple organization.

One of Sinan’s later works, the mosque at the Selimiye külliye in Edirne (1564-1575 CE / AH 971-983) is one of the architect’s masterpieces, in which a central dome thirty-one meters in diameter is located above a vast open-plan octagonal prayer hall. Eight round arches rise from eight massive piers to support the elaborately tiled dome, whose drum is perforated by dozens of windows. The mosque is flooded with light thanks to the many windows that are cut into each of the building’s tympana and buttressing domes, from the ground level up to the heights of the central dome. A large chandelier is suspended from the dome to create a virtual plane just above the level of worshippers within the prayer hall; its plan is a series of concentric circles, reinforcing the focus of worshipers on the centrally-placed mihrab structure, which is visible from all points within the prayer hall. The spatial organization of the Selimiye mosque represents Sinan at his architectural height; the elegant plan and arrangement of its buttressing domes is the culmination of his efforts to create a large unified, open, centrally-focused space for worship that masterfully exploits the structural potential of a considered aggregation of domes.

After his achievement at the Selimiye mosque, Sinan continued to practice for more than a decade, designing other notable projects including the Sokollu Mehmed Pasha Mosque (1571-1572 CE / AH 979-980) and the külliye of Mihrimah Sultan (1568-1569 CE / AH 976-977), both in Istanbul. Sinan’s last major work was the Atik Valide Mosque (1583 CE / AH 991), designed when the architect was over ninety years old. Arranged on sloping hillside like the Süleymaniye complex, this complex is more modestly scaled than its earlier model but arguably more sophisticated in its stratification of varied structures.

Some clues as to the original decorative programs of Sinan’s buildings survive in his extant works, primarily in the form of the Iznik tile murals surfacing wall panels and some structural piers inside many of his buildings. However, none of the numerous wall paintings that Sinan commissioned have survived in any of his buildings, excepting a handful that underwent major restorations conducted long after their original application, and thus their correlation to the original works is currently unverifiable. The disappearance of these original artworks greatly impacts contemporary readings of Sinan’s works, as a vital part of the architecture’s symbolic and decorative program has been lost. Additionally, the relatively bare interior typical of Sinan’s mosques today contributes to a modernist interpretation of Sinan as an architect concerned primarily with spatial orders rather than surface ornamentation.

Gulru Necipoglu argues in her monograph on Sinan’s life and works that his structures can be classified in terms of architectural complexity and artistic investment based on the relative social statuses of the patrons who commissioned them. Her reading of Sinan’s large and varied built legacy connects the degree to which he was allowed to experiment and surpass the limits of traditional Ottoman architecture directly to the interest of imperial patrons in raising the level of architectural achievement within the empire at a time of centralized authority and prosperity. Following Sinan's death at the end of the sixteenth century, shifts in the imperial hierarchy of the Ottoman empire came to impact the system of architectural patronage across the region. Religious construction declined in prominence as the empire pursued an increasing number of secular projects, and those religious structures that were erected were typically either standard royal mosques or non-royal madrasas. Given the seventeenth century abandonment of many non-traditional mosque typologies explored during the sixteenth century, the age of Sinan was the height of creativity and experimentation in Ottoman imperial religious architecture. A uniquely prolific and inventive individual, Sinan greatly benefitted from living and working during a time when the empire’s patronage structure and ambition for rapid and widespread development were most supportive of stylistic innovation.