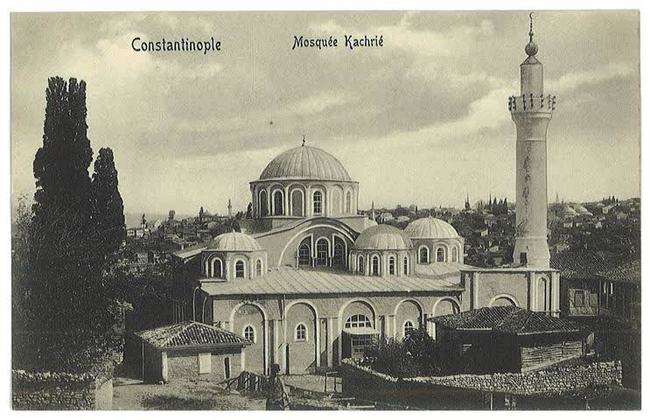 Share
The Kariye Museum, formerly the Church of the Monastery of Chora, is located inside land walls east of Edirnekapi or the Gate of Adrinopolis, a major gate at the end of the Divanyolu or Mese. Its name "chora," meaning "in the country or land" is a mystical concept or a description of the monastery's location outside the city prior to the building of the Theodosian walls. This significant monument of the Palaelogon age sits on the downward slope of the seventh hill of the city, with a view of the Golden Horn below.

A monastery is believed to have existed at this location as early as the third century BC, and certainly by the sixth century BC, as mentioned in an anonymous biography from the ninth century that attributes its foundation to St. Theodore, the uncle of Empress Theodora. Restored after the earthquake in 557, the basilica was rebuilt in its current Greek-cross plan in the eleventh century, during Comnenian rule. Additions and renovations between 1316-1321, sponsored by Theodore Metochites, a famous scholar and prime minister under Andronicus II, produced the church as we see it today.

Grandvizier Atik Ali Pasa (d. 1511) converted the church into a mosque and provided an endowment for its maintenance. Its mosaics and frescoes, inappropriate for Muslim prayer, were obscured with plaster or boarded up and a minaret was added to the southwest corner. Damaged by fire and earthquakes, the mosque gained worldwide attention following a restoration in 1876, accompanied with a publication in French exhibiting its iconographic program. It became a major destination for foreign travelers, including state guests such as Emperor Wilhelm II. It was been declared a museum in 1948, with the inauguration of an eleven year long restoration program directed jointly by the Byzantine Institute of Washington D.C. and the Dumbarton Oaks Center of Byzantine Studies. While the monastery buildings have not survived, the church as a mosque formed the center of an Ottoman complex including a madrasa (medrese), a takiyya (tekke), a soup kitchen (imaret), a Koranic school (sibyan mektebi) and a tomb (türbe) attributed to one of Prophet's companions (sahabe). Built at different times, the buildings of the complex have disappeared with the exception of the tomb that was rebuilt after the 1766 earthquake.

The church:
The church has a Greek-cross plan with a square domed nave and apse, flanked by an parekklesion to the south, a corridor to the north, and an inner and outer narthex to the west. The main entrance is through the outer narthex to the west, which was enclosed by a covered porch during the 1876 restoration. A single door, in axis with the main entrance, leads into the four-bay inner narthex before the nave. Its vaulted space is dimly lit by windows in the drum of domes at either end.

The square nave, crowned with a single dome, is extended with an apse to the west that contains the sanctuary. Its construction dates to the eleventh century. The arches holding the dome and the tall drum illuminate the space from atop. The four large piers carrying the pendentives are allowed to project from the walls, creating shallow niches on three sides. The interior is clad with precious marble panels below the level of the arches, and the original marble mihrab remains in the sanctuary. Other elements of Islamic worship, the minbar, the preacher's pulpit, carpets and calligraphic panels, were removed during the 1948 restoration. Doors on either side of the sanctuary open into small side chapels with polygonal apses, observed more clearly on the eastern façade where fragments from earlier foundations can also be seen below the apse. The nave has a few mosaics, including a famous twelfth century depiction of the Deesis, which includes a miniature portrait of Isaac Comnenus.

The parekklesion to the north of the nave was built by Theodore Metochites in the fourteenth century to serve as a funerary chapel. Enclosed with an apse to the west, it spans the length of the nave and the inner narthex, and merges with the outer narthex at a corner. This corner bay is articulated with archways creating a visual separation of the two annexes. A door here allows access to the minaret steps. The parekklesion has a door that leads to the inner narthex and an exit across from it that is now sealed. The parekklesion has a vaulted roof with a dome at the center where the space is sectioned off by a triple archway carried on piers and two columns. This dome is a smaller version of the nave dome; a short passage with an elaborate doorway connects the two domed spaces. There is a corridor to the south of the nave, which connects a side chapel with the inner narthex.

The Church of the Monastery of Chora is renown for its mosaics and frescoes that epitomize the revival of the arts and intellectual thought in Constantinople under the rule of Palaeologan dynasty. The vaults of the inner and outer narthexes are covered with colored mosaics on a golden background, illustrating scenesfrom the life of Christ and the Virgin Mary. Theodore Metochites, who was the patron that facilitated the redecoration of the church, is portrayed above the entrance to the nave presenting the church to an enthroned Christ. The parekklesion, on the other hand, is adorned with frescoes exploring the theme of life and death, including a renowned depiction of the Orthodox resurrection on the apse semi-dome. Marble capitals of parekklesion columns, carved with angel busts, are unique creations.