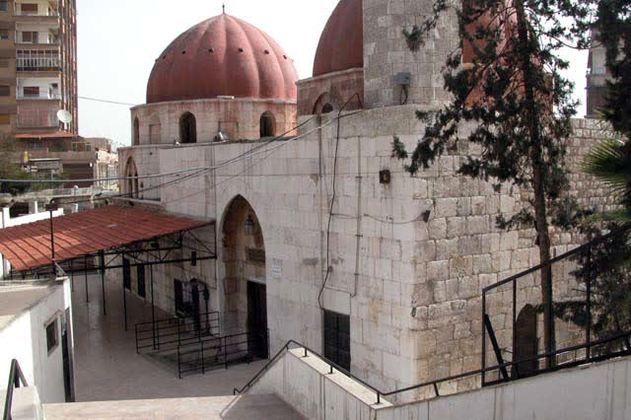 Share
Madrasa al-Rukniyya is located in al-Akrad neighborhood of the Salihiye district, to the north of the walled city of Damascus. It was built in 1224 by Amir Rukn al-Din Mankurs al-Falaki, Ayyubid Governor of Damascus. The structure is built of stone and houses a madrasa, a prayer hall and the patron's tomb. It was restored extensively in 1985 by the Syrian Department of Religious Affairs.

The madrasa courtyard is accessed from the main entrance on the north façade. Decorated with kufic inscriptions and geometric motifs carved into stone, the arched portal opens into a closed courtyard (sahn) with a central fountain. The domed core of the courtyard is wrapped by a narrow corridor, which is delineated with twin-arches resting on heavy granite columns to the east and west, and with triple archways to the north and south. Its ribbed dome is carried on masonry squinches transitioning to an octagonal drum above the four corner piers. The interior is illuminated with four twin-arched windows on the sides of the drum, decorated with colored glass. The triple archway to the south leads into the prayer hall, while a doorway along the eastern wall leads into the tomb chamber.

The prayer hall is without decoration, and the mihrab is marked with juss, or gypsum. On both sides of the mihrab niche, two windows open onto al-Rukn Street. Its minaret, rebuilt entirely during restoration, rises at the northwest corner of the complex.

Located to the east of the courtyard, the tomb is covered with a smaller ribbed dome that sits on a sixteen-sided drum atop of an octagonal one. The upper drum has eight individual windows, while the lower is pierced with four twin-arched windows. Colored glass arrangements adorn the dome windows. A tall rectangular sarcophagus centered below the dome marks the grave of the founder. The walls of the burial chamber are animated with arches niches that incorporate doors to the south and west, and twin-windows to the north and east.