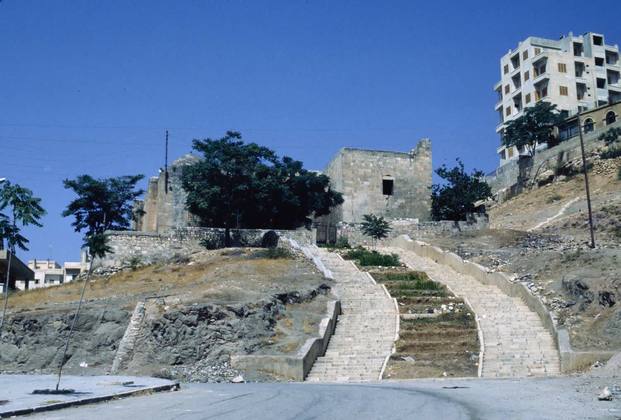 Share
The Mashhad al-Muhassin, also known as Mashhad al-Dikka, was first constructed in 962/351 AH by Sayf al-Dawla, is the earliest known Shi'i shrine in Aleppo. It is located on the slope of Jabal Jawshan, a hill in the western part of Aleppo in what was once the medieval city's surrounding hinterland.
Nothing remains of the original structure attributed to Sayf al-Dawla, and over the course of its life, the complex went through many expansions and construction phases spanning almost three decades. Today one enters the complex from a modern stair ascending from the streets below to the east side of the complex. At the top of the stair is a platform onto which the eastern facade of the building opens. On the southern side of this facade is an inscription plaque mentioning Nur al-Din Mahmud ibn Zangi and the date 1146/541 AH. It is unclear what this inscription refers to, or whether it was originally part of this section of the building.1 On the north side of the facade is a large entrance portal taking the form of a recessed iwan vaulted with muqarnas. This portal bears an inscription plaque dating it to 1197-1198/594.2
Entering the portal, one emerges onto a rectangular courtyard. On the south side is a prayer hall formed from three domed bays, the central bay before the mihrab embellished with muqarnas at the springing of the vault. On the southeastern side is the mausoleum, which consists of a smaller domed anteroom and a larger domed tomb chamber. The date of the tomb chamber is currently uncertain. The prayer hall was at least partially reconstructed in the first decades of the thirteenth century during the reigns of Ayyubid sultans al-Malik al-Zahir Ghazi (r. 1173-1216/568-613 AH) and al-Malik al-Aziz (1216-1237/613-634 AH), as evidenced by inscriptions bearing the names of those two rulers.
Notes:
Sources: