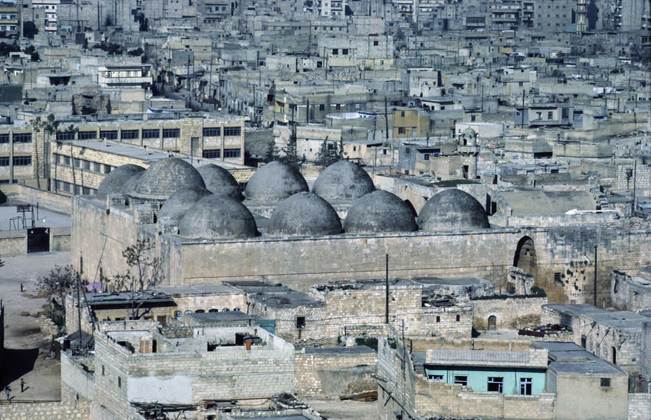 The Madrasa al-Firdaws, whose name means “paradise,” is located some distance outside the medieval city walls of Aleppo in the neighborhood known as al-Maqamat. Its patron was Dayfa Khatun, the wife Ayyubid sultan al-Malik al-Zahir Ghazi, and the effective queen of the region between 1236 and 1242. She is one of the most prominent architectural patrons in Syrian history, having established large endowments for the maintenance and operation of her charitable foundations. An inscription mentions that the madrasa’s “construction was ordered” in 1236/633 AH, but the attribution in the same inscription to Dayfa Khatun makes this problematic given her regnal dates of 1236-1242/633-640. It is thus possible that the inscription refers to the foundation rather than the completion of the complex.1

Due to its location outside the city walls, the madrasa was developed as a freestanding structure, and takes the form of a rectangle surrounding a square courtyard. The building has a stark façade made of neatly dressed stone slabs. The building’s eleven domes that rise around its perimeter add to its monumental impact.

The madrasa originally had four entrances: one on the east, one on the west, and two on the north side of the building. Today, only the eastern portal is functional. This portal takes the form of a shallow iwan with an elongated, narrow archway and muqarnas vault.

The portal leads to the courtyard through a vaulted corridor. The courtyard itself is paved with beautiful black-and-white stone designs and is equipped with an octagonal basin at its center. Surrounding the courtyard on three of its four sides is a covered aisle supported with an arcade (riwaq), while the north side is dominated by a large iwan.

Inscription bands on under the riwqas surrounding the courtyard feature a highly unusual combination of verses in Arabic containing a combination of poetic passages and Qur’anic text. Yasser Tabbaa has argued that together describe a series of mystical (Sufi) practices that the original residents of the madrasa would have undertaken. These practices aimed at attaining a connection to the Divine, and possibly included recitation of the Qur’an, ecstatic dancing, and the consumption of wine as a stimulant.2

Through the riwaqs, one comes to the domed chambers on the east, south, and west sides. Each is one bay deep and three long. The space on the south side of the courtyard serves as a prayer hall. Here, the mihrab dome is distinguished by an elaborate muqarnas base and twelve small openings. The mihrab is made of veined white marble, red porphyry and green diorite. Its niche is composed of granite columns with muqarnas capitals. Two additional domed chambers flank the prayer hall in the southeastern and southwestern corners of the building.

The large iwan, or classroom, is across the courtyard from the prayer hall. The walls are carved with three niches used for book storage. This iwan is backed by a larger iwan that faces north and opens onto the exterior of the building. Though this iwan currently faces a wall due to the dense urban growth around al-Firdaws, it is believed to have been originally open to a walled garden and a large pool. Yasser Tabbaa compares this double-sided iwan in al-Firdaws to similar iwans in Baghdad madrasas, palatial structures in Mardin and early Islamic palaces in Samarra and Bust, tracing its origins to the palatial typology. Residential cells are located in the northeastern and northwestern parts of the building.3