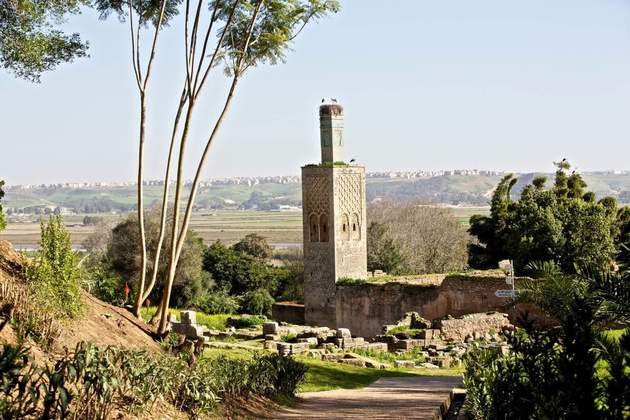 Share
The Chella necropolis is located in the district of Rabat known today as Cité Khalifa, approximately 2.5 kilometers southeast of the medina of Rabat and 750 meters west of the Oued Bou Regreg estuary. The necropolis complex, home to the tombs of several generations of Marinid royals, and its surrounding fortifications were initiated by ruler Abu Sa'id (reg. 1310-1331) in 1310/709 AH and completed by his successor Abu 'l-Hasan (reg. 1331-1348) in 1339/ 739 AH. The funerary complex was constructed upon the site of a Marinid cemetery that had been in use since 1248/645 AH. The cemetery itself was constructed on the ruins of the ancient Roman outpost of Sala Colonia, a walled port city founded by the Romans in 40 CE.

Sala Colonia was located at the site of an older Phoenician or Carthaginian settlement known as Chella that dated from the third century BCE. It was from this ancient port town that the later Marinid necropolis took its name. Sala Colonia was abandoned by the Romans by 250 CE, but its ruins were inhabited occasionally by various Berber tribes over the next several centuries.

The area was not developed beyond its Roman form until the mid-twelfth century, when Almohad military leaders formed a camp near the ruins of Sala Colonia in order to train troops for the war against Christian forces in Spain. This camp would later serve as the foundation for the city of Rabat, officially established by Almohad ruler Ya'qub al-Mansur (reg. 1184-1199) in 1195/591 AH after his major victory over the Christian forces at al-Arak. While al-Mansur had bold plans for the development of Rabat into the capital of the Almohad empire, Rabat was quickly abandoned following his death in 1199/595 AH when residents migrated to the neighboring city of Salé, located nearby on the north bank of the Oued Bou Regreg river. Rabat remained almost completely unpopulated until the early seventeenth century, and its deserted condition during the Marinid rule of the thirteenth and fourteenth centuries made it a fitting site for a city of the dead. Additionally, the city's past as a training ground for anti-Christian forces held historical and religious significance for Marinid sovereigns as they waged campaigns against the Catholics in Spain.

The Marinid Chella necropolis sits within a larger fortified site defined by massive six to twenty-meter-high perimeter ramparts. The plan of the walled area, derived from the layout of the Roman city of Sala Colonia, is an irregular five sided polygon that forms a trapezoid with one sheared corner. The site ranges from 265 to 310 meters in width along its east-west axis, and from 180 to 265 meters in length along its north-south axis. The longitudinal axis of the site is rotated forty-five degrees counter-clockwise from the north-south meridian.

The crenellated walls and towers of the Chella fortifications were constructed in the red stone characteristic of the region. Twenty square towers are spaced evenly along the length of the ramparts. There are three minor entries to the interior of the site at points along its perimeter as well as one primary monumental portal located near the northern end of the west wall.

The majority of the area enclosed by the Chella ramparts is occupied by untended gardens with occasional Roman and Marinid ruins. Natural springs supply fresh water to a series of channels and pools that cut across the landscape in both constructed and unplanned networks. The site remains largely unbuilt and is currently home to a wide variety of flora and fauna. Today the gardens and ruined structures serve as a nesting ground for a large stork population.

The Marinid necropolis itself covers a relatively compact 1,800 square meters in plan, less than 3 percent of the area of the overall Chella site. The walled complex is located twenty meters inside of the south-eastern wall of the Chella ramparts at the center of its length. Parallel to the exterior wall along its longitudinal axis, the Marinid funerary compound is thirty-five meters long and approximately fifty-two meters wide.

As much of the site has been damaged in the centuries since its construction, there are few surviving decorative details of note. However, certain artistic architectural features are still intact and provide hints as to what the Marinid complex looked like at its height in the mid-14th century.

The exterior of Abu 'l-Hasan's tomb features relief sculpture of architectonic elements in which a series of three cusped arches are supported by colonnettes. Atop the arches are additional colonnettes and a field of lozenges in relief. This decoration may have been modeled specifically on the exterior of the unfinished minaret of the Hasan mosque (1195-99) located only 1.75 kilometers to the north of Chella. These and other surviving details suggest that the surface decoration of the necropolis structures constructed by Abu Sa'id and Abu 'l-Hasan was strongly influenced by the Almohad style of ornamentation visible in the abandoned buildings of nearby Rabat.

Much of the necropolis at Chella was destroyed in the great Lisbon earthquake of 1755 and thus today the site is largely in ruins. However, the surviving portions of the complex are significantly substantial to evoke the former grandeur of the collection of tombs. The grouping of Marinid buildings, gardens, and Roman ruins remains notably picturesque and highly popular among tourists.