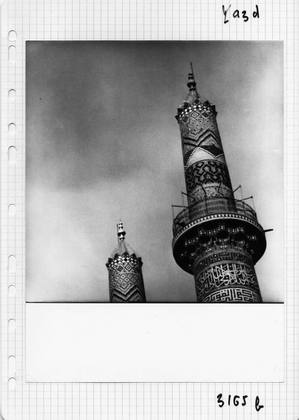 Share
The mosque of Mir Chaqmaq, also referred to as the Masjid-e Nau, was one of the first constructions in a larger institutional complex consisting of a madrasa (theological school), khanqah (a hostel for sufis or dervishes), caravanserai (travelers inn), qanat and ab anbars (subterranean canal and water cistern), public baths, maidan or public square and bazaar sharing the name. It was built outside Yazd's fourteenth century city walls in the Dehkok quarter, which has since transformed from a suburban garden to a dense residential and commercial district. Today only the mosque, maidan and a few hydraulic structures exist from the original complex. The mosque is noted for the excellence of decorative craftsmanship on its marble mihrab (niche marking the direction of prayer in a mosque) and its portal's tile mosaic calligraphic panels.

Construction of the mosque was begun by Jalal Al-din Chaqmaq Shami, the governor of Yazd under Timurid ruler Shah Rukh in 1436-7, and was completed some years later, with a number of subsidiary structures through the active patronage of Bibi Fatima Khatun, wife of Mir Chaqmaq. Built soon after additions to the Masjid-i Jami or cathedral mosque of Yazd by the same patrons, the Masjid-i Mir Chaqmaq was built in a period of great economic prosperity. Large urban design projects were ordered after Timur's conquest in 1393, funded by revenues made possible by the Timurid policy of retaining the Muzaffarid provincial capital of Kerman, Fars and Shiraz in Yazd. The masjid represents for Yazd, a larger phenomenon of Timurid patronage of madrasa-khanqah complexes as a unifying and propagandistic strategy to control a large and diverse empire. Parallels can also be seen in the Timurid nobleman-noblewoman character of this patronage as reflected in Timur and his wife, Saray Mulk Khanum's commission of Bibi Khanum mosque in Samarkand or Shah Rukh and his wife Gawharshad's patronage of complexes in Mashhad and Herat.

The mosque is built of mud brick finished with white washed with plaster, along the traditional Iranian four-iwan structure around a square courtyard with no minarets. The stepped screens of the qibla (direction towards Mecca, and hence Muslim prayers) and the tunnel-vaulted bays of the court's internal facades appear to dominate the court's modest proportions. The great central dome, the primary iwan, and the qibla screen, together form the major architectural feature of the complex. Aesthetic traditions from the Masjid-i Jami and the Masjid of Pir Husayn Damghani of Yazd are continued in this masjid, with the use of niches, windows and galleries to relieve the visually dominant supporting members of the dome and iwan. The central mihrab consists of marble with decorative mosaic tile borders and Quranic inscriptions. The celebrated portal is ornamented with masterfully executed stucco and calligraphic friezes in Naskh and Thulth scripts, one of which reveals details of the institution's Waqf or endowment. Panels of faience mosaic or glazed tile mosaic in blue, yellow, white and black colors are interspersed within patterned brickwork facades, as is typical of early Timurid decorative art. The slightly pyramidical dome springs from large squinches in a two-tiered circular drum, embellished with bands of mosaic tile inscriptions in Kufic script. Unlike other Timurid works, the mosque does not feature complex decorative vaults. However, the brilliance of its outer dome's lotus petal gores in turquoise blue tile work defines Yazd's skyline with the similar dome of the Masjid-i-Jami.

The mosque influences subsequent Islamic architecture of central Iran with its introduction of a shorter iwan covered with a cloister vault. The mosque also features a novel innovation in incorporating a wind tower within the mihrab, a feature later seen in the Masjid-i Sar-i Rik of Yazd. The mosque today is identified with a later nineteenth century addition to the complex, the Takieh-ye Mir Chaqmaq. The site has in recent times been the focus of intense conservation efforts and public concern to revive the historic complex and the adjacent Haji Qanbar bazaar.