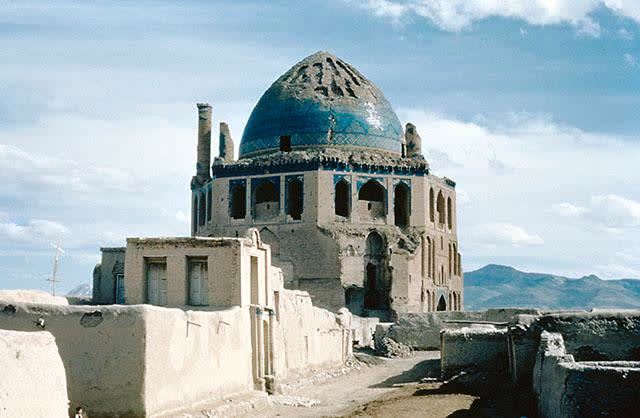 Share
This structure is all that remains of Sultaniya, the much praised Mongol city founded c.1285 by the Il-Khan Arghun and dedicated as the capital by his son, Sultan Uljaytu Khudabanda, in 1313. Sultan Uljaytu probably began building his tomb at the time of his accession. Upon converting from Sunni to Shi'ism, the Sultan decided that the large mausoleum would be a shrine for Imam Ali and Imam Husayn, whom he planned to transfer from their resting places in Iraq. This decision resulted in modifications to the building during construction. After reconsideration, the scheme was abandoned and the building eventually became Uljaytu's own tomb, as originally intended.

The plan comprises an octagon with a rectangular burial chamber protruding from the southern side. The exterior is built out with triangles on the northern end, extending the north, east, and west facades. The dome rests on the upper terrace, carried on the interior by the corbels of a thick wall. Minarets rise from the upper terrace at each of the eight corners. The interior is divided into two stories of eight-bay arcades. A third arcade runs below the base of the dome, opening to the exterior and not the interior.

Uljaytu's religious intention for the structure, as the shrine of the Imams, is demonstrated by the presence of the funerary chapel beyond the southern wall; a mihrab included on the qibla wall of this chapel; and externally, the prioritization of the exterior wall facing Mecca, with more opulent decoration. Two phases of interior decoration may also reflect the change in purpose of this structure. The earlier decoration, intended for a religious monument, made extensive use of brick laid in common bond; plaster simulated brick bonding and end plugs; and Kufic inscriptions formed with turquoise glazed squares. Two axes were established by the more elaborate decoration of four of the eight bays, comprising complex geometric patterns assembled in brick and thin strips of glazed and unglazed terracotta cut to shape. The second phase may reflect the need to convert the structure into a space considered more appropriate for secular use. A dado of hexagonal glazed tile was installed, above which the entire interior surface, including the dome, was covered with a coat of plaster. The plaster was painted with decorative patterns and inscriptions, partially in relief.

The exterior decoration was apparently not changed during the conversion from a religious monument. The exterior of the uppermost gallery is decorated with glazed and unglazed terracotta and mosaic faience, the interior surfaced with exquisite painted plaster, visible from the outside. The structure's cornice and the minarets were patterned with dark and light tile. The dome was covered entirely with turquoise glazed brick.